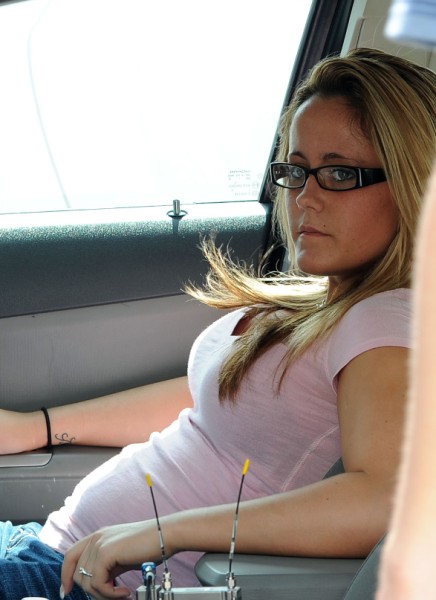 Hang on to your husbands ladies because there’s another Teen Mom on the prowl. Jenelle Evans broke up with new boyfriend Courtland Rogers and, naturally, took to twitter to tell the world. The world answered back, “Who the hell cares?” Actually it didn’t, which is even more depressing!

Is Twitter or Facebook the new tree in the woods? If info doesn’t go on social media did it really happen?

Anyway, Jenelle and Courtland have been dating for the last several weeks and apparently she was already sizing him up for daddy material and they were looking at houses together. Stevie Wonder saw this wasn’t going to work out but everyone seemed happy that Jenelle wasn’t rubbing up on Kieffer Delp anymore so they went with it (although, really to be considered better than Kieffer isn’t saying much).

But then tragedy struck! I have no idea what happened but I can only assume it involved a lot of curse words, finger pointing, alleged battery charges and slammed car doors because Jenelle broke it off with Courtland. She wrote on Twitter, “Which Teen Mom is SINGLEEEEEE again? MEEEEEE. I’m single once again. I ended things and didn’t think things were working out between me and Courtland. I rather not go into detail why but I’m happy with this decision.”

According to Gather.com this wasn’t the biggest surprise. Jenelle tipped people off about the break up when she said she was going to spend time with her son, Jace, alone earlier in the week. Yes, spending one-on-one time with your son without cameras or nasty boyfriends around is news nowadays.

Can we just cue Kieffer? You know he’s coming back. He always comes back. He’s Jenelle’s Camilla Parker-Bowles or Ennis Del Mar. She can’t quit him! And can you blame her? He’s a catch. He has no job; beat her up once; loves drugs and threatened to expose a sex tape they made. Now that’s father material!

Are you surprised by the Jenelle Evans and Courtland Rogers break up news? Are we waiting for Kieffer to enter stage right? Does Teen Mom 2 Jenelle Evans make Amber Portwood look stable? I’ll tell you one thing. Kieffer Delp is no Gary Shirley.