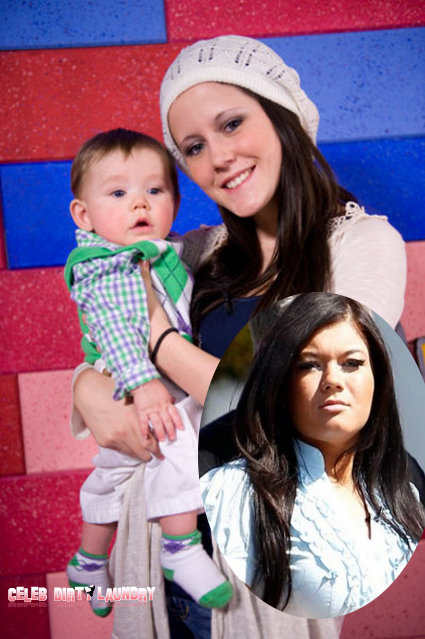 For those of you who haven’t heard, Teen Mom star Amber Portwood is back behind bars at Madison County Jail after asking the judge to send her to prison on Thursday. Portwood allegedly made the request because she “couldn’t stand” the strict conditions of her court-ordered drug rehabilitation program.

Gary Shirley, her on-again, off-again boyfriend, who she was seen walking into the court holding hands with before she was arrested, expressed sadness over the situation on Twitter, and Teen Mom 2’s Jenelle Evans felt a need to add her not-so-comforting two cents.

“Don’t stress it Gary about Amber,” she tweeted. “No offense but that was Amber’s choice not wanting to get clean and she could of done it. I did.”

One can’t help but wonder how Jenelle could possibly compare her situation to Amber’s and attempt to give herself credit for completing something Amber could not, seeing how they were completely different.

For one, Amber was on house arrest, and court-ordered to take daily drug tests, and meet with the drug court weekly. Failure to comply with such rules meant she would be sentenced to five years in prison.

By contrast, Jenelle was given one year probation, which meant she was to abstain from drugs and alcohol and being in the presence of known drug users. She was not on house arrest, and she was not drug tested daily. Even so, Jenelle failed to adhere to both of those conditions on multiple occasions throughout her probation and failed at least two drug tests; she was also reported to have been with Kieffer multiple times during her probation period. It just so happens that the courts were far more lenient with Jenelle than they were with Amber.

That being said, Jenelle is too quick to give herself credit. At least in my eyes, Amber and Jenelle’s conditions/situations are not of equal stress and hardship; therefore, I think Jenelle should think before she tweets.