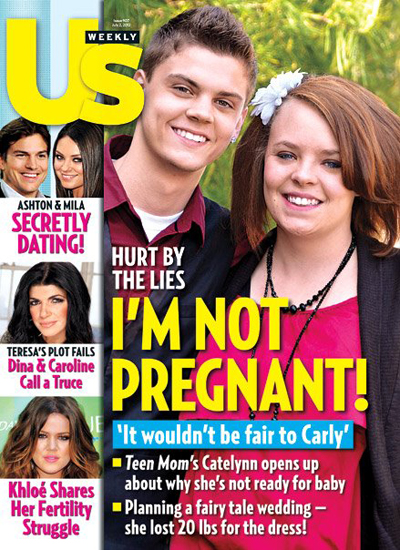 Teen Mom Catelynn Lowell takes center stage on the latest cover of Us Weekly Magazine, and the 20-year-old wants everyone to know that she is definitely not pregnant and having a shotgun wedding, despite all of the rumors.

“We’re getting married next year and I don’t want to be big and huge in my wedding dress,” she said. “I’m still waiting on my degree, and want to get married — and be married for four years — and make some memories ourselves before having kids.“

According to the mag, Catelynn not expecting another child and has actually lost 20 pounds of weight for her upcoming wedding to Tyler Baltierra, with whom she had a baby girl named Carly in 2009. They later gave Carly up for adoption.

Catelynn also revealed that she first heard the baby rumors on Twitter and just laughed them off, claiming that the false reports were the result of quotes of Tyler’s being taken out of context.

“I just laugh because I’m like, ‘Okay people, believe whatever you want,’ but in four months when a baby’s not popped out, you’ll know I’m not pregnant,” she added. Related: Teen Mom’s Catelynn Lowell Pregnant Again!

To find out more about Catelynn’s wedding and future plans– pick up the current issue of US Weekly for all the details!