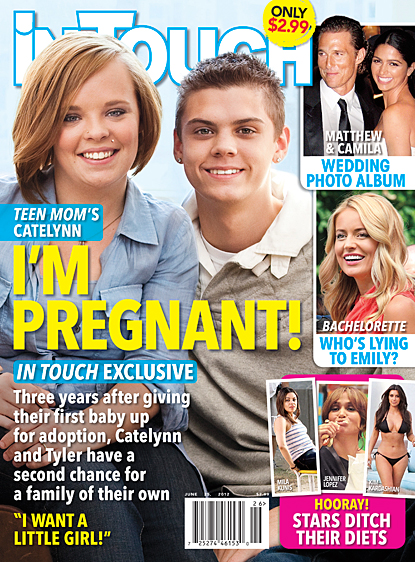 The current issue of InTouch features the cover story ‘Teen Mom Catelynn I’m Pregnant Again.’  In an exclusive interview InTouch gets the news from Catelynn Lowell’s friend that she and Tyler Baltierra are expecting a baby again.  Three years ago the couple had a baby girl and they gave her up for adoption.  They feel this new pregnancy is a second chance for them to have a family of their own and they want another girl.

In Touch has the scoop: “Hours after buying a pregnancy test at her local drugstore, Catelynn Lowell’s heart pounded as she waited in her bedroom for the results. After what seemed like an eternal few minutes, the little white stick revealed the same news that, three years earlier, had led to one of the most difficult decisions of her life: giving up her beautiful baby girl for adoption just days after her birth.”

Catelynn’s longtime friend, Jamie Pyrzewski confirmed the news to InTouch.  She told the magazine that Catelynn is both nervous and afraid.  The new baby is due this winter and unlike their first child together they have decided to keep it.

But a short period of panic and “total denial” quickly gave way to excitement. “She is now feeling complete joy,” a family insider tells In Touch about the mom-to-be, who is due this winter.  Adds another source close to Catelynn, “This time, she knew immediately that she wanted to keep the baby. She’s just so happy.”

We first saw Catelynn on 16 and pregnant when she made the difficult decision to give her daughter up for adoption.  This time Catelynn and Tyler who have a solid relationship and know they are ready for a new baby

Also included in this week’s issue the magazine has the wedding photo album of Camila Alves and Matthew McConaughey who got married this past Saturday.  They also have all the details of who is lying to The Bachelorette’s Emily Maynard.  hmm wonder what that is all about!

To find out all this information and more, pick up the current issue of InTouch on stands now!