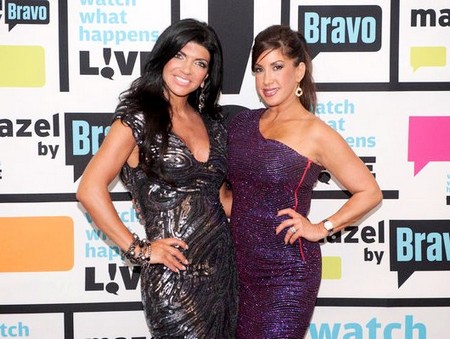 This new round of war between Teresa Giudice and Jacqueline Laurita, is due to Teresa being upset that Jacqueline put on Twitter some of what she thought were their private texts! She tweeted: Can’t believe Jac put out some of our texts, and now *that’s* a news story…Ugh…Here’s my wish along w/full texts:

Of course I checked out exactly what Teresa had to say on her blog. She said she’s physically sick of the whole thing, but wants us (fans) to have the entire story, so here are all of the texts. Draw your own conclusions.

She posted all the texts, and said “she hasn’t deleted any of hers”! She clearly thinks we see her as a saint! On her blog, she said Jacqueline contacted her last Friday at 1am: yes, it does give me chills, and yes wish it would stop!

She hasn’t contacted Jac back and won’t, cause she wants this to end. Teresa truly wishes her and her son and her whole family nothing but the best. Teresa doesn’t want any of her fans to bash Jacqueline or her mother or nieces or whoever else on Twitter: Believe me, I feel your support and I know you feel my frustration. Instead maybe just say a prayer for all of us. xx

She clearly must have been tipsy off of her Fabellini’s, because no prayer can help her, clearly that bitch needs an exorcism!  Here’s some other texts that were posted by Teresa, go to her blog for all of them.

Following the text is an update she added to her blog, after the texts were posted today! These 5 are from Jacqueline, to Teresa:

4) I have a surprise for you

5) Only teasing you! Lol!…it’s a joke! Get it? I want peace at the reunion, you know that.

After the texts were posted today, Teresa added an Update to her blog. She said she posted the whole thing, only to end all of this, once and for all. To me that’s honest and mature. Sorry if you disagree xx.

Earlier today Jacqueline responded to a tweet sent to her, that said, “Teresa is a Con Artist”, Jac added, “Teresa and her hubby are both Con Artists”! Another tweet from Jac: Teresa thinks she’s being clever w/her text edits. And finally to Teresa: Nice try Teresa Ugly people never win. You’ll see. Everyone will see. By.

Yes people – the Real Housewives of New Jersey Reunion is looking like it will be a lovely event!