Teresa Giudice Blames Melissa Gorga for Her Daughter’s Recent Outbursts – Who Is Really To Blame? 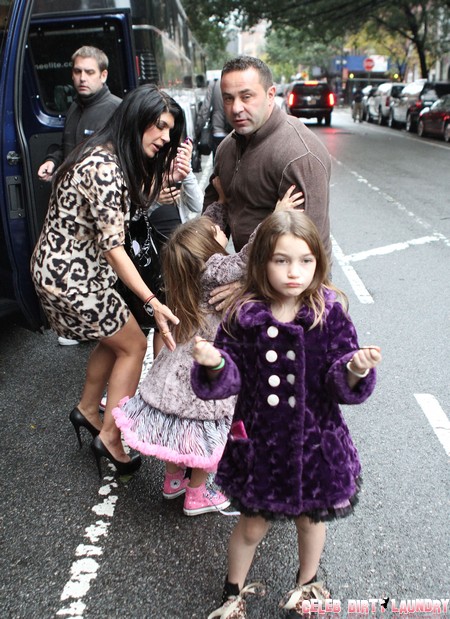 Teresa Giudice, the fat lipped star of The Real Housewives of New Jersey, is blaming her brother, Joe Gorga’s wife, Melissa Gorga, for her daughter Milania Giudice’s outbursts. Phew, what a family! According to a recent report released on September 12th, 2012, Milania is starting to rebel and act out over not seeing her cousins, Melissa Gorga’s children.

Teresa puts the blame solely at Melissa’s door. According to a source, “Milania and Antonia (Melissa and Joe’s daughter) have been best friends since the day they were born, and it hurts Milania a lot not to get to see her cousin as much as she used to.” Teresa also openly discussed the situation in her Bravo blog earlier this week and said, “I love that little girl so much and would do anything to have her over more. We’ll keep inviting her and our door is always open. Hopefully her mama will let us have a play date soon.”

Since there is no amicable relationship between Melissa and Teresa, we don’t expect that much anticipated play date to happen anytime in the near future. According to Teresa, who spoke out openly about the production of the show, “We haven’t filmed in a year, and coincidentally, we haven’t seen Melissa and her kids in a year. Maybe, if the cameras come back around we’ll see ‘all-about-family-Melissa’ again too.”

Teresa’s hypocrisy reaches new heights with this recent blame game, seeing that she has also not been taking steps in seeing Melissa. She blames Melissa for everything and in true Teresa Giudice fashion, she is using the children as pawns in her reality television chess game – the only sad part is that no-one will be winning anytime soon…

Does Milania sound like a word for a new STD to you? Let us know your thoughts in the comments below.