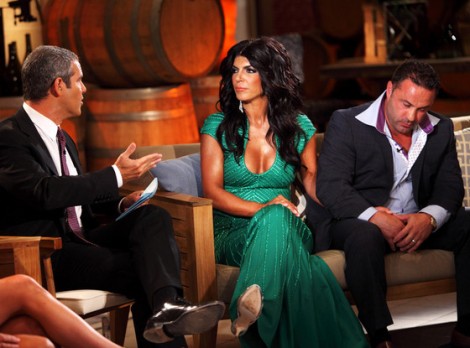 How excited are you for the The Real Housewives Of New Jersey Reunion Part 3? If it’s anything like the past two episodes then it’s sure to be full of screaming fits, nasty allegations and everyone hating on Teresa Giudice. But is Teresa over letting everyone rag on her? I’m not saying it’s wrong (Teresa deserves her fair share of finger pointing) but it is a little one-sided at the moment. That’s where everyone’s favorite house-husband Joe Giudice enters the picture. Joe and Teresa are calling out all the strippers in the room and there’s more than you think.

Sure everyone knows about the Melissa Gorga/stripper story line. By the preview, it looks like Joe Giudice goads his brother-in-law into admitting that he met Melissa while she was working as a dancer in a t-tty bar. Joe Gorga gets pretty crazy leading me to believe that it might just be true. But wouldn’t there be pics? Wouldn’t someone have some video? There’s video of Channing Tatum grinding up on girls during his stripper days. Why not Melissa? Does Joe Giudice finally have some proof? Let’s wait and see!

But what about the other stripper? Jacqueline Laurita lived in Las Vegas and a lot of us assumed she met her husband, Chris Laurita, there. But did the single mom dance to make ends meet? The Giudices seem to think so. But not so fast! Jacqueline has said in the past she met Chris while she was working as a hairdresser in Chicago – not on a pole in Sin City. Who do you believe? I tend to side with Jacqueline because she has nothing to gain by lying but the Giudices appear to know something that we don’t. Whatever the outcome, Chris already has the best line of the whole show when he says, “We’re talking about strippers like they are serial killers!” Brilliant. Hey girls, ain’t nothing wrong with stripping – oh, sorry – dancing. You got to do what you got to do. Just maybe make sure no one has any hard proof of the fact if you’re going to go on reality television and lie to the world about it. The Giudices have no shame. They’ll bring up every skeleton in your closet to deflect off themselves!

Do you think Jacqueline and Melissa were both strippers? Why would Jacqueline lie? What other bombs will the Giudices drop on part three of the reunion?