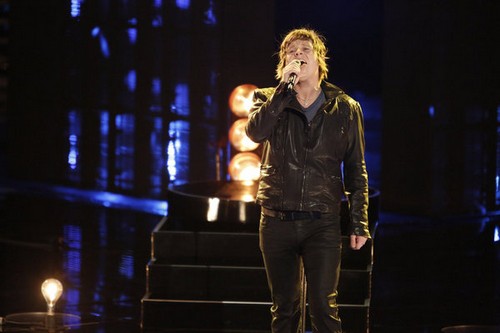 Terry McDermott took the stage tonight on THE VOICE for his Top 6 video performance.  Terry sang “I Wanna Know What Love Is” by Foreigner.  Tonight’s show the top 6 performed live in front of coaches Christina Aguilera, Adam Levine, CeeLo Green and Blake Shelton for America’s vote and a chance to move on to the semi-finals.

Judges Comments: Christina, “There is no doubt after that Blake has the strongest team, I mean what I say and I know I give you a lot of compliments, but you are really amazing – you murdered it tonight”. CeeLo “Terry I love you, I love that rendition, it really moved me and I thought of your mother, your wife and child, it was a strong performance”. Adam “You always impress us and blow us away, you slayed it and blew us away”. Blake “I was right, we did the right thing, America needs to know how hard that was what you did, sitting there with just a piano and a cello, it was unbelievable”.

Scottish rocker, Terry McDermott is next from Blake’s team and he is singing, “I Want To Know What Love Is” by Foreigner.  To vote for Terry McDermott: 1-855-VOICE-04