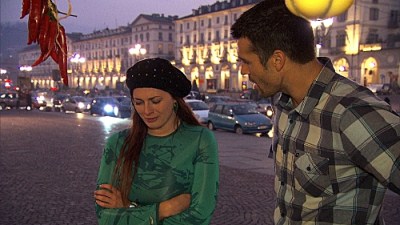 Tonight an all new episode of our favorite reality show The Amazing Race airs on CBS.  The show is called ‘Taste Your Salami’ as the eight remaining teams depart from the pit stop at Escalinata in Paraguay and hit a new continent on the next leg of a race around the world for one million dollars.  On last week’s episode Andrew and Elliott were the last team to arrive and unfortunately they were both eliminated from the race. Elliott is devastated, but Andrew tells him that he will treasure this experience forever! If you missed the episode you can read our full official recap HERE.

On tonight’s episode the stress of the race begins to take it’s toll on several teams as they race through Italy. An unexpected beheading occurs as teams are asked to clean polish some of Turin’s most treasured statues – it’s a dirty task. A random act of kindness leaves one team in tears, will it be Brenchel or perhaps another team? All teams are on a mission, but Rachel R. and Brendon seem to be on “Mission Impossible” when Rachel R. has yet another break down, this time she is devastated because she actually thought she was racing around the world with her best friend!

Will Art & JJ stay at the top tonight with having finally won a leg? Will Brendon & Rachel continue to excel, or will the fall down because of all the bickering? Rachel & Dave lost their lead last week and had to use the Express Pass, will they be able to climb back up? Get the answer to all these questions tonight, when the fourth episode of season 20 airs.

Don’t forget to come back tonight at 8:00 PM when we will be live blogging the show with all the up-to-the-minute details. You don’t want to miss it!

RECAP: Teams have to fly 6,000 miles to Turin, Italy. When they arrive, they have to take a Ford Focus and drive themselves to Lingotto Building. Bopper and Mark make a mistake and head right to the airport before going to the travel agency so they have to turn around and go back. At the airport, everyone else is on a different flight than Bopper and Mark, theirs is leaving an hour and fifteen minutes later.

The first seven teams have arrived in Italy. Dave and Rachel get into a bit of a spat, he calls her a “wise ass” then she pulls over the car and tells him to drive. At the Roadblock, teams must choose between a fast forward which is landing a helicopter on a helicopter pad or to rappel 120 feet from the Lingotto building. Brendon and Rachel R. are the first ones done and have to head to the Museum National to find a 1916 model Ford where they will find their next clue. Once they arrive at the museum, they need to use the auto park feature on the car to park the vehicle.

Bopper and Mark have just arrived. Meanwhile, Rachel and Dave are still having personality conflicts as she rappels. Nary and Jane, Vanessa and Ralph are done and headed to the museum. Kerri and Stacy are done as well, Stacy did a good job even though she is afraid of heights.

Rachel R. and Brendon have a fight when he tries to park the car at the museum and she just keeps yelling at him, pulling her best Godzilla impression at him. Regardless of their arguing, they are the first to find the clue and it is a penny with Mole Antonelliana which is a major landmark in the city and they have to figure out that they have to go there.

Art and JJ landed their helicopter in the Fast Forward and are headed to the Pit Stop. They arrive to meet Phil and are the first team, they win $5,000.00 each.

Meanwhile, Rachel R.’s breakdown is getting more intense, she and Brendon are headed to the Detour and she is crying her eyes out upset that they are arguing.

Rachel and Dave are scrubbing a statue when Dave applies too much water and beheads the statue, with Nary and Jamie are next to behead a statue. Meanwhile, Rachel R. and Brendon are trying their palette with the salami.

Rachel and Dave are the first ones to finish cleaning the statue and are headed to Piazza Castello at the Pit Stop, they are the second team to arrive.

Kerri and Stacy are the next team to try their hand at the salami and when they arrive, Rachel R. is having yet another breakdown!

Bopper and Mark are in last place, while Joey and Danny arrive third at the pit stop with Rachel and Dave fourth, Kerri and Stacy fifth and Brendon and Rachel Sixth. Kerri and Stacy are seventh, which means Bopper and Mark get the bad news that they are the last team to arrive. Phil goes on to tell them how their families will be proud of them. Art and JJ come over and tell Mark they want to split the money with him. Phil goes on with the surprises and tells Mark and Bopper it is a non-elimination race, they are still in it.

So that’s it for tonight, no elimination.