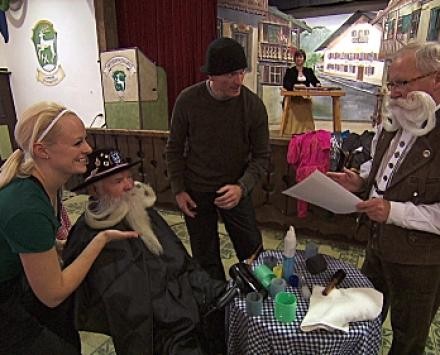 The Amazing Race 2012 returns tonight to CBS with a new episode titled ‘Uglier Than A Mud Rail Fence.’  Last week’s episode of The Amazing Race was the most action-stuffed of season 20, and surprisingly, one of the most heartwarming in recent memory.  Team Kentucky Bopper and Mark were the last team to arrive at the pit stop last week.  They were both really disappointed because Bopper has a young daughter who suffers from respiratory problems and they were running the race for her.

In one of the most heartwarming gestures I have ever seen on reality TV Art and J.J. approached Bopper and Mark and told them that they were going to split their $10,000 winnings with Bopper so that his daughter might get better treatment for her problems.  WOW, such a nice thing to do.  Not to be outdone Phil told Bopper and Mark that even though they had come in last, this was a non-elimination round and so they were still in the Race.  If you missed the episode you can read our full recap here!

On tonight’s show The remaining teams continue on the fifth leg of the race and the Amazing Race settles down in Bavaria, Germany where the teams scour King Ludwig’s quarters in the same castle that served as the inspiration for Sleeping Beauty’s castle, and tempers flare during one Team’s walk through a snowy labyrinth.  In Germany the teams search for magical gnomes and an evil witch tries to stop them as things get really hairy.

We will be live blogging the show with all the up-to-the-minute details at 8PM EST so make sure to come back to this spot and watch the show with us.   Make sure to refresh often so you get the most current info!  While you wait for our recap check out the sneak peek video of tonight’s show below!

RECAP: Turin, Italy hosted the 2006 Olympics and in the heart of this city is the start of the 5th leg, Art & JJ were the last team to win the last leg, so they are the first to depart and head to the train station on their way to Ehrwald, Austria. Teams seem to be relatively rested and ready for the next leg. The last team to depart is Mark and Bopper because they arrived last in the 4th leg. All teams are making their way on the same train to Ehrwald, Austria and Mark and Bopper couldn’t be happier that there are still some teams left on the train with them.

Kerri and Stacy are the last team and seem to be lost. After arriving last in the 4th leg, Mark and Bopper must learn to yodel in what is the Speed Bump that only they have to complete.

Art & JJ are the fist team to finish styling a beard and have to figure out that they have to next head to Neuschwanstein Castle which is known as Sleeping Beauty’s castle.

Rachel & Dave are the next team to depart and finish a beard. Meanwhile, Vanessa & Dave have just arrived to style a beard. Kerri & Stacy and Brendon & Rachel R. have yet to arrive at the Detour but Bopper and Mark have finished their Speed Bump and already at the Detour.

Art & JJ have arrived at the castle and are walking up a long winding road while Vanessa & Ralph are also on the same walk with Vanessa bitching all the way, they must find Ludwig’s bedroom to get their next clue.

Nary & Jamie have finished their beard while Brendon & Rachel R, Kerry & Stacy, Mark & Bopper are trying to finish their gingerbread houses. Kerry & Stacy are the fist teams to finish.

Art & JJ are the first team to get their next clue from Ludwig’s bedroom, they must go to the town of Fusen to a eishockey and curling rink. Joey & Danny are the next team to head out with Vanessa & Dave next.

Art & JJ find the clue box, it is a Road Block and teams must use their travelling gnome to play a game of curling.

Meanwhile, Kerri & Stacy have gone to the wrong castle, Bopper & Mark as well, which is going to slow these teams down.

Art & JJ are the first team to finish their gnome curling and are headed to the pitstop at Landhannes Farm where the last team to arrive may be eliminated.

Rachel & Dave are trying their hand at gnome curling as Art & JJ arrive at the pit stop. Being the first team to arrive, Art & JJ have won a trip for two to Thailand. This is the third first place finish in a row and Phil jokes for them to get out of the game and give another team a chance to win first place.