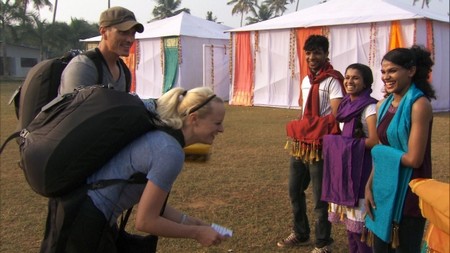 Emmy award winning The Amazing Race 2012 returns tonight to CBS with a new episode titled ‘Bollywood Travolta.’   Last week’s on the eighth leg of the race we saw the six remaining contestants in Karatu, Tanzania as they took a ride through Ngorongoro Crater .  They got to see the countryside and animals on safari such as zebras, elephants, gazelles, baboons and lions.

Earlier in the Race, Dave and Rachel and Art & JJ had made a pact to U-turn team Big Brother, if either team had the chance to do so. But when Dave and Rachel arrived at the U-turn, they decided not to use this option.  JJ was very p*ssed at Rachel & Dave’s broken promise and said he would never speak to them again.  Nary and Jamie came in last place last week and this time they were eliminated.  If you missed the episode you can read our full and detailed recap here.

On this week’s episode the Amazing Race goes to Bollywood! While in Cochin, India during a Road Block, Army couple Dave and Rachel must perform as the lead dancer in a choreographed routine while wearing proper Bollywood attire in order to receive the next clue.  Meanwhile gender disparities cause one Team to lose faith when a challenge seems insurmountable, and emotions run high as a Racer must weigh their own well-being against their future in the game.

We will be live blogging ‘Bollywood Travolta’ with all the up-to-the-minute details at 8PM EST so make sure to come back to this spot and watch the show with us.   Make sure to refresh often so you get the most current info!  While you wait for our recap check out the sneak peek video of tonight’s show HERE!

RECAP: Boppper & Mark were on the brink of elimination four legs ago, but last week they came in first. Five teams left, who will go home tonight?

A wild life refuge is the start of the next leg, Bopper hurt his leg before arriving at the pit stop last time – but the Medic said he is fine to continue in the race. Teams are now on their way to India. Bopper & Mark are the first time leave, then Rachel & Dave whose relationship with Art & JJ has been severed. The flight doesn’t leave until tomorrow morning. Art & JJ are upset at Rachel & Dave, they feel that they should have U-turned Big Brother, Rachel & Dave like they promised. All teams are making their way to Coachin, India. Teams must take a bus to Thevera to the Sacred Heart College. Mark & Bopper are the last team to get on a bus.

The first team to arrive is Rachel & Dave. At the Roadblock, teams must work on the set of a Bollywood movie and learn a dance routine, when the lead choreographer thinks they have learned all the right moves. Art is taking one for his team and Rachel R. and Vanessa for theirs. Meanwhile, Mark & Bopper are still on the bus and Mark is really has bad motion sickness.

Mark & Bopper have finally arrived on the set. Rachel & Dave are the first team finished, they have to the Indian Coffee House and visit the head waiter. They get their quickly to find a Detour. Teams must choose between CRICKET or CLUTCH IT. In cricket, teams must master India’s favorite game. In clutch it, teams must acquire the skills of the rickshaw, a three wheeled vehicle.

Rachel, Vanessa, Art and Mark are having a hard time with the Bolly dance. Vanessa makes it after three attempts, Art tells JJ that he can’t do it. Rachel R. is done, they are in 3rd place. Finally, Art does it, he is finished his Bolly dance, there is only Mark left.

Rachel & Dave are headed to the Pit Stop, Bolgatty Palace, in Coachin. Rachel & Dave are at the Rickshaw and Rachel is driving, even though she failed driver’s ed. Art & JJ, Rachel R. & Brendon are trying their hand at cricket.

Rachel & Dave arrive at the Pit Stop, they are the first time and win a trip to St. Lucia, this is their fifth first place win.

Rachel R. & Brendon are done with cricket, with Art & JJ a close second; both teams are on their way to the Pit Stop. Mark is on his 11th attempt at Bolly dancing and Bopper is trying to convince him to quit.

Brendon and Rachel are team number two at the Pit Stop. The Bolly dancing breaks Mark down completely, he quits and decides to choose his three children over the game because it is making him so sick. The heat combined with motion sickness were to much for Mark.

Art & JJ are team number three, Vanessa & Ralph are team number four. Bopper quit, but the Indians are not letting him; they convince him to continue because they want him to finish. Bopper finally finish and the group of Bolly dancers cheer and hug him to congratulate his success. Bopper and Mark head to the Pit Stop together. When they arrive, Phil tells them they are the last team to arrive. Both Bopper and Mark are really emotional, Mark tells Phil that they could really use the money, but it’s not worth their lives. Phil tells the two that they are going to have to continue to work hard, this is a non-elimination and they are both still in the race. The two are completely shocked, Phil reminds them that in the next leg they will encounter a speed bump that they will have to complete.