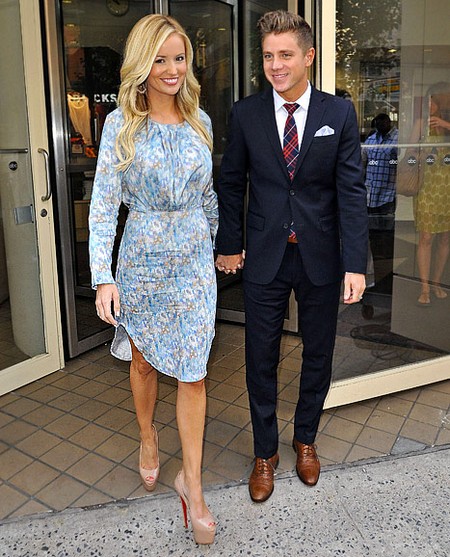 The Emily Maynard and Jef Holm engagement is getting more interest for being  fraudulent and mercenary than for  its romantic allure.  Of course Emily and Jef are denying the recent and on-going reports about their union being more of a business contract than that of a love connection, just like the days when Emily fought the “rumors” off with Brad Womack. We all know how her plight with Brad turned out and chances are as the new The Bachelor season draws closer, the truth about these two will also rise to the surface.

It is almost impossible to pick the love of your life by playing a game that entails a process of elimination. You are just picking the best of the bunch, much like Best in Show at a dog event. At a dog show are not necessarily seeing the best looking dog in the world, you are just seeing the best looking one that was entered into that event. The same goes for the The Bachelorette show where Emily found Jef. He might have been the best in the bunch, but does that really make him her soul mate?

Emily and Jef’s unnamed friends have stepped up to defend the couple’s reputation, claiming that this couple is not trying to snow their fans. They are in love and making a go of things. When Jef’s brother, Mike Holm, spoke out a while back and confirmed that Jef and Emily were in a heated argument because she was sexting another guy, Jef called his brother a trouble maker. He had no idea while his brother would make up something like that, basically calling him a liar.

Emily and Jef couldn’t understand why Jef was also accused of contacting and even meeting up with his old girlfriend, as seen in media reports a few weeks ago. This couple just doesn’t get why people keep accusing them of falsifying a relationship for the sake of a business contract. Could it be that it is something people believe Emily is very capable of because she has done this before?

Fans of the The Bachelorette and The Bachelor were duped once before when Emily took a solid stand on her relationship with Brad. She was adamant that it was the real deal. Then they found out that the two not only had a very bumpy road of a relationship, but that it was also much shorter than the couple led the fans to believe.

The Bachelorette also offered up what many felt was a false scene for the finale of Emily and Jef’s season. The two became engaged on one of the worst sets ever created to give the feel that the two were still in the tropics. It was nothing more than the back lot of some movie studio with leftover props to sell this engagement scene to the fans.

They didn’t even take the plants out of their pots when setting up this scene. They littered different colored shutters all over the place which was a sad attempt to add island color. With the engagement scene being all smoke and mirrors, how can you take this wedding planning that Emily keeps talking about to heart?

Emily likes the fame, so keeping up a fake love affair with Jef plays into her desperate need to be a star. Keeping the The Bachelor and The Bachelorette alive between seasons has kept the franchise viewers interested, so there’s good reason for this. It’s free on-going advertising for the show.

Emily and Jef will most likely not walk down the aisle to tie the knot in this lifetime. It would be ludicrous to put her on another show for a third time at finding love. Until the next The Bachelor season starts, Emily and Jef are the best advertising to keep the interest alive.

When the new show starts, fans will find a new favorite to watch and Emily might finally get the break she’s been vying for. Someone, somewhere might offer her steady work that doesn’t entail serial make-out sessions with strangers. Jef will then be free to continue bringing clean water to the underdeveloped world.