Emily Maynard Was Determined NOT To Get Engaged 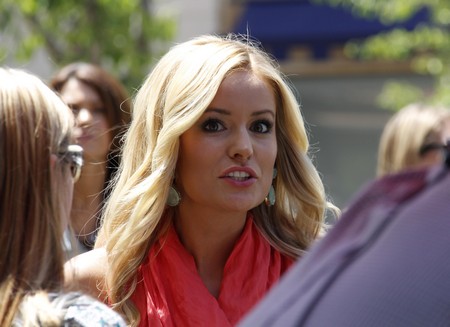 She may have been looking for love, a future husband and a father for her daughter Ricki but Emily Maynard was not determined to leave The Bachelorette engaged. She already was put through the ringer when she accepted Bachelor Brad Womack’s proposal only to have that relationship die out. She and Ricki were both hurt and she doesn’t want to repeat the same mistake.

As for now, Emily has two great guys pining for her heart and hand, but she intends to play it smart says a source for Us magazine.

“She was truly in love with two really good people. It wasn’t clear-cut,” a source admits that Emily “entered the [finale] day hell-bent on not accepting anyone’s proposal,” a show source tells Us Weekly, adding that this season’s final episode is nothing short of “a roller coaster.”

It’s down to Arie Luyendyk Jr. and Jef Holm as the final two that are left vying for Emily.  Who do you think is a better fit, Arie, who is a race car driver that admits to sleeping late and not being a homebody or Jef, the CEO of a bottled water company, who seems ready to embrace family life?

I have to say, I think a real relationship with Arie would be short lived.  I think the sparks are palpable but her day to day life would be a real drag for him. I also think he knows it and wouldn’t actually go through with a proposal.   Jef seems like he would enjoy taking Ricki to school or to the movies.  I think Jef is a realistic pick for being future husband material.

Will you be tuning in to the finale on Sunday?  Do you want to see Emily Maynard engaged? Who do you think Emily will choose?  Tell us your thoughts in the comments below!