BY Cate Meighan on July 25, 2012 | Comments: one comment
Related : Emily Maynard, The Bachelorette 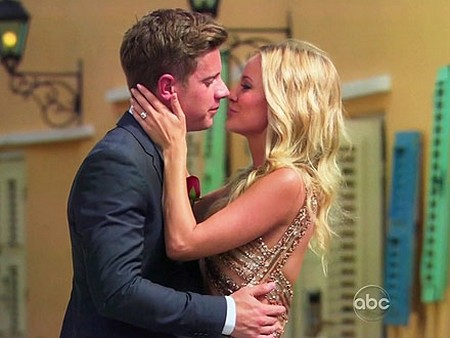 If you watched The Bachelorette this season then you already know that when invited to join Emily Maynard in the fantasy suite, Jef Holm declined out of respect for Emily and her daughter Ricki. The newly engaged couple made an appearance on Jimmy Kimmel the other night and talked about that move, among other things.

When Jimmy asked what the heck Jef was thinking, he explained that it never occurred to him that they wouldn’t be together in the end, so they’d have all the time in the world to create their own fantasy sex suite.  Jimmy asked if the duo has started working on that and Emily was quick to chuckle that she’s a lady and not married yet, as Jef raised his eyebrows at the audience to indicate otherwise.  This modesty act is pretty funny coming from Emily – she was unmarried and pregnant with Ricki when the child’s father, Ricky Hendrick, died.

Interestingly, the couple helped to keep things a secret in the past few months by using the code names Dolly and Dean.  Even little Ricki was introduced to Jef as “Dean”.  That way if she talked to her friends no one would know that it was really Jef who won Emily’s heart.

Do you think that Emily and Jef are the real deal?  They do seem different together than most of the couples that this show has put together.  Even when interviewed they seem to trade little comments and have secret jokes like a real couple does.  Will they make it for the long haul?  Do you think they’ll want a televised wedding if they actually do make it down the aisle?  Tell us your thoughts in the comments below.