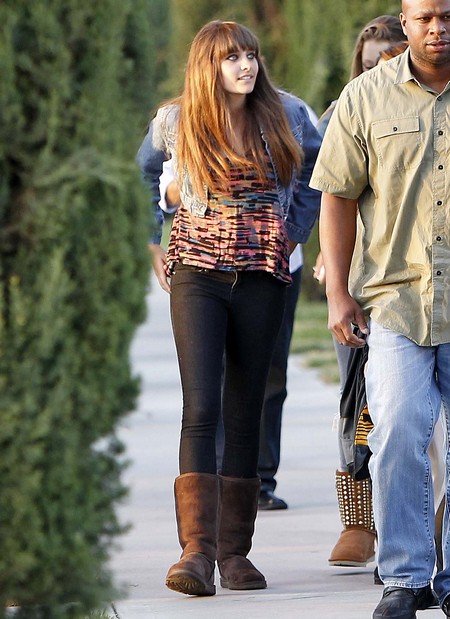 Let’s pretend for a minute that it was pre-2009. Much simpler times for the Jackson kids, sure they had to wear masks in public but they also got more privacy and were not thrown into bizarre feuds with Michael Jackson’s family.

So it’s being reported that Paris Jackson is seeing red after the issues that have come to light recently over her late father’s $500 million fortune and the strange “kidnapping” story of her grandmother, Katherine Jackson. Many of Michael’s siblings are hard up for cash and snatched 82-year-old Katherine in a attempt to get at some of the wealth.

“Paris truly believed Katherine had been kidnapped by a family member,” said a source “Paris thinks her Aunt Rebbie and Uncle Randy conned Katherine into leaving L.A. and she grew frantic when she didn’t talk to Katherine for a week. Ultimately, she had one of her cousins file a missing persons report.”

I can’t even begin to imagine how Paris, Prince and Blanket are having to cope with such strong emotions and voices coming from every single direction. Just over a week ago Paris was seen outside the family estate in a match with her Aunt Janet.  When Janet supposedly screamed abuse at Paris and the 14-year-old responded with a slap of her own, telling her aunt “This is our house. Not the Jackson family house. Get the f*** out!”  Of course since then TMZ has denied that this confrontation ever took place.  Whom to believe…

If I were a 14-year-old girl being in the spotlight I would have done the same thing too. Can you imagine losing your father, not being close to your mother and your grandmother (your guardian nonetheless) hasn’t spoke to you in over a week? I commend Paris for sticking up for what she believes is right and watching over her family. Paris and her brothers had to grow up fast and now, with their masks off, they seem to be doing the best they can in a difficult situation.