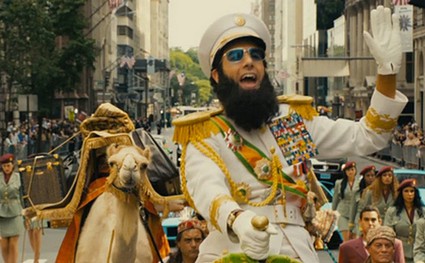 Admiral General Aladeen is Sacha Baron Cohen’s latest character that he’s created and he’s released a video replying to “The Academy of Motion Pictures Arts and Zionists” for not allowing him to attend the Oscars this Sunday as The Dictator.

The leader of the Republic of Wadiya says that this is an act of aggression and that no Wadiyan films have been recognized by the Academy like “When Harry Kidnapped Sally”, “You’ve Got Mail-bomb” and “Planet of the Rapes”.

Now we know that the Academy has very strict rules against those who try a promotional stunt on the red carpet, Aladeen appearing on the red carpet doesn’t look possible since he’s somewhat based on Saddam Hussein.

He’s did something similar once before at the MTV Awards when he appeared as his character Borat, he flew into the audience dressed as an angel and landed on Eminem’s face.

I’ve heard many people saying that what he’s doing isn’t funny – acting as a Dictator. I for one think it is very funny, they’ve just got to calm down and try not to take it so seriously.  What do you think?  Hit the comments below!