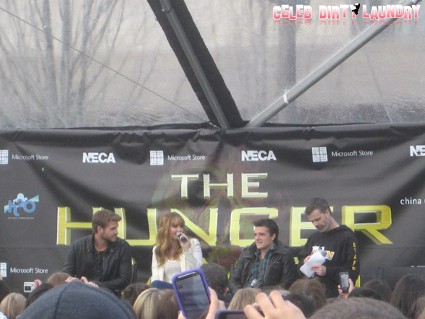 Yesterday in Seattle, hundreds (maybe close to a thousand) gathered in University Village to get a glimpse of The Hunger Games cast as they wrapped-up their national mall tour. Actors Jennifer Lawrence, Josh Hutcherson, and Liam Hemsworth attended the event and, in my humble opinion, looked as if they had themselves a fantastic time. They’re young actors who’ve just stumbled into this world of gargantuan fame. It’s easy to tell that they’re having fun . . . and soaking in the limelight while they can; though, given the grandeur of this up-and-coming franchise, it looks as if they’re going to have to get used to — and quick! — this high caliber of fame/fortune.

Fans of all ages, from screaming 14-year-old fangirls to 60+, waited hours upon hours in the cold Pacific Northwest rains to participate in the LIVE question and answer session. While those who showed up early (AKA those who spent the night at the mall) had the chance to receive VIP “meet-and-greet” passes, many fans found solace in the fact that they could still catch a glimpse of these rising stars without having to suffer through grueling lines or jumping through an unreasonable number of hoops.

I had the chance to go to the event and, let me tell you, it was quite chaotic. But only in the best, most exciting and enthralling ways possible, of course. When J-Law, J-Hutch, and L-Hem walked out onto the stage, the high-pitched screams of those wanting to marry the celebs was enough to shatter the ear drums.

As Jennifer came out onto the stage, she said, “Seattle is definitely one of the loudest cities we’ve been to.”

The Q&A eventually got underway and, while the sound system provided difficulties with hearing (constant screaming didn’t help either), the stars were asked some fun questions and gave some great answers.

When asked if she did all her own bow-and-arrow work in the film, Jennifer Lawrence said that she did in fact do all the bow and arrow work. “I had a teacher that taught me how to use the bow correctly,” she said. She joked: “I did do all the arrow shooting, but didn’t do any of my own sitting.”

The other stars of the day were asked great questions as well. J-Hutch was asked how he became an actor and Hemsworth was asked about Collins’s story, and what exactly is his favorite element within the work.

To take a look at the LIVE Q&A, watch the videos I took at the event. I apologize in advance for the loud noise and shaky camera — I was repeatedly getting elbowed in the stomach by small girls who were INTENT ON GETTING JOSH HUTCHERSON TO MARRY THEM. Unfortunately, at least to my knowledge, none of those girls left the event with a ring on their finger. I managed to get subtitles down, so hopefully that will aid in your watching as well.

Someone asks J-Law who she thinks is cuter: Josh or Liam. See what she has to say!

Are you excited for the Hunger Games film? How could you not be, right? If you attended any of the National Mall Tour events, let us know in the comments sections below! We’d love to hear about your experience. Make sure to subscribe to our YouTube channel!