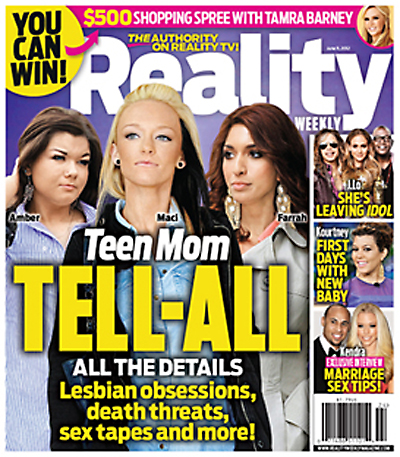 Drama is nothing new for the stars of Teen Mom, but the latest issue of Reality Weekly claims that some pretty sordid secrets about the young moms may be soon coming out into the open!

Reportedly, the show’s cast, including Maci, Farrah, Amber, and Catelynn, are quaking in their flip-flops over a new unauthorized tell-all book that will tell all of the especially unwholesome truths about the girls that MTV has edited out of the TV show.

“No one knows who is behind it and it’s caused a lot of tension,” said an insider to the magazine.

“There are so many things that have been swept under the carpet — MTV had to edit them out because they were so hard-core. More than one of the Teen Moms has a sex tape, so those details will definitely be in the book.” Related: Facing 5 Years Of Hard Time, Amber Portwood Is Out Of Jail For Now

To find out more about the teen moms’ scandalous secrets, including lesbian obsessions, sex tapes, and death threats– pick up the current issue of Reality Weekly for all the details!