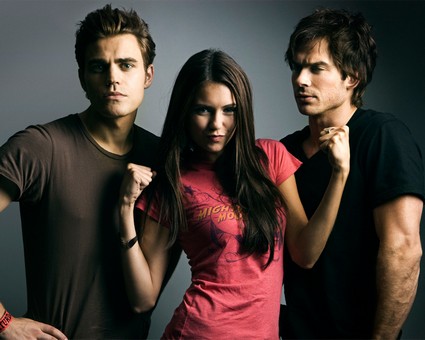 After Thursday’s episode of The Vampire Diaries, it’s safe to say that Season Three is getting pretty exciting! There are so many intersecting plot lines of un-requited romances, double-crossing, and sinister plans—I can’t wait for next week! Thankfully, Julie Plec—the executive producer of the popular CW show— has given the scoop to TV Line about what’s coming up for the Mystic Falls gang and it sounds like it’s only going to get better!

We saw all the originals drink the champagne toast a la Elena, but is Ester really going to be able to kill all the originals? Though Plec can’t say much without revealing the plan for the rest of season, she does say “If the villains on our show have proven anything, it’s that they have a durability that borders on supernatural. There are five Originals and an Original mama, and we’ll see who comes out the other side of it to tell the tale.”

Ester told Elana that it will take time to kill Klaus, and now Plec is hinting that the next episode takes place during a full moon. “Like most things that take heavy-duty witch spells — there needs to be some sort of recurring celestial element attached to it,” she says.

Full moon? Does that mean we will be seeing Tyler soon? “Tyler’s still going to be a little while [on] his journey of self-discovery and whatever it is that he’s doing. We’ll see him back in the spring.”

From one sexy hybrid to another—yes, I’ll admit that I’m actually starting to like Klaus a little. The show’s writers are really giving him some nuance, especially in how he interacts with Caroline. But are we going to continue to see the good in Klaus? “I think that you can define “villain” in a lot of ways, and Klaus certainly is and will continue to be the provider of much antagonism and some very, very extreme jeopardy for our heroes,” Plec says. “But no one is singularly just evil. He has got his own demons, his own wants, his own desires, and there are things that he’s never experienced that he wants in his own life, and I think that the two are not mutually exclusive. We could get a glimpse into what makes Klaus tick as a man without compromising his ability to wreak major havoc in this town.”

Of course, Plec can’t give away who is going to live and die, but she is admitting what we might already know, that everyone is in for some serious danger. “Many of our characters are going to come face-to-face with their maker at some point before the season is over. But whether they meet and shake the hand and get dragged away with their maker is a whole other question. There are going to be a lot of moments where we’re not going to be sure who’s really safe and who’s going to see it through… But there’s definitely going to be some jeopardy by season’s end.”

The Vampire Diaries Airs Thursday’s at 8/7c.  If you want to read some spoilers and see a sneak peek video before next week’s show go here!