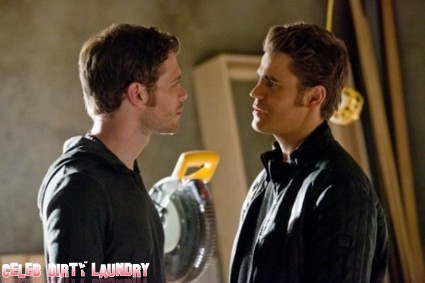 Last night was a crazy night of betrayals on the CW’s hit show The Vampire Diaries and we recapped it for you.  Episode 10 ‘Our Town’ was all about Stefan (Paul Wesley) and how far he was willing to go to get Klaus (Joseph Morgan) to do what he wanted.  In our  wrap-up we have some observations of last night’s show and some questions.

Stefan really went far on tonight’s episode and put Elena (Nina Dobrev) and the rest of Mystic Falls in danger by pushing Klaus almost too the limit.  Stefan demanded that Klaus have his hybrids leave Mystic Falls and for the first time we saw Klaus back down when Stefan became the bigger villain.  Do you think Stefan went too far?

Caroline (Candice Accola) came back to Mystic Falls for her birthday and she told Tyler (Michael Trevino) it is over, but we all know she still has a thing for Tyler.  When Klaus demands that Tyler bite Caroline he refuses.  We all know a bite from a hybrid would kill Caroline.  Caroline sends Tyler a text on her birthday and he comes to see her and assures her he can protect her from Klaus.  They get started in a passionate kiss and he bites her, accidentally, or so it seems.  Do you think Tyler bit her on purpose – is Klaus controlling Tyler.

Caroline became deathly ill after being bitten by Tyler and she thought she was going to die.  Klaus came to her house and gave her his blood and saved her.  What will this mean for Caroline?  I think Klaus has plans for Caroline!

Jeremy (Steven R. McQueen) left town this week after Elena had him compelled by Damon.  Elena did not want Jeremy to be in danger anymore.  Bonnie (Katerina Graham) did not agree with what Elena had done – she thinks Elena should not have taken Jeremy’s choices away.  Do you agree with Elena protecting her brother at the cost of his free will?

Stefan is certainly not making any friends this season.  To get Klaus to do what he wants he takes Elena to the bridge where her parents died and threatens to kill her and turn her into a vampire.  What do you think –  can Elena ever forgive him?

No more kisses this week between Damon (Ian Somerhalder) and Elena but there there is the promise of more kisses in the future.  Elena says to Damon at one point about kissing him, “It’s not right’ to which he replies, ‘It’s right, but just not the right time.’

What did you think of last night’s show? Sound out in the comments below and let us know what you think about our questions!  If you dare to see a spoiler of next week’s episode called ‘The Ties That Bind Us’  go here!