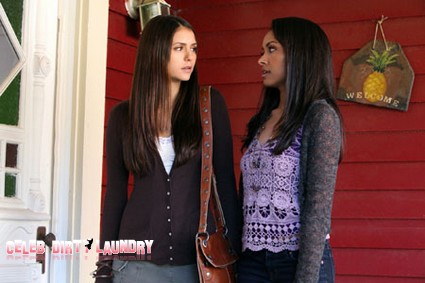 Last night was all about families on the CW’s hit show The Vampire Diaries and we recapped it for you.  Episode 12 ‘The Ties That Bind’ was all about Bonnie (Katerina Graham) meeting her mother Abby (Persia White), Caroline (Candice Accola) & her Dad Bill (Jack Coleman), Klaus (Joseph Morgan) & Elijah (Daniel Gillies) & Damon (Ian Somerhalder) and Stephen (Paul Wesley).  In our  wrap-up we have some observations of last night’s show and some questions.

Best line of the night has to go to Klaus – when he comes to see Damon looking for the coffin that Abby locked with a spell he says to Damon, “I will tear you limb from limb, and only then, when you’re a writhing mass of blood and flesh, will I rip your heart from your chest.”  I was not a huge fan of Joseph Morgan as Klaus but he is growing on me.  Do you like how Joseph portrays Klaus?

Is it just me or does it suck for poor Bonnie?  Her mother runs out on her, without even a phone call when she was growing up and the first time she meets her she drugs her with herbs and mutes her witchy powers?

How did Dr Fell know to prepare some vampire blood and keep it in reserve at the hospital emergency ward. Did she know that Caroline’s dad was going to be attacked by Tyler as werewolf? Can she see the future? Or is it just that she knows that vamps and maybe other supernatural creatures are around Mystic Falls so special cases requiring the healing power of vampire blood will arise? That vampire blood is the perfect panacea!

Can Tyler find the incredible willpower to listen to Caroline’s dad and keep changing into his werewolf identity until he breaks his sire, the evil Klaus’ hold.

As mysterious as Dr. Fell remains, the reanimation of Elijah is even more important… and potentially deadly… for Elena! Recall that as Klaus’ sworn enemy Elijah is totally against the creation of a hybrids. Fine so far, but recall that Elijah originally came looking for Elena so as to destroy her so that her doppelganger blood could not be used by Klaus to create hybrids. Now that Damon has removed the dagger from Elijah’s heart after finding him in the fourth coffin has he inadvertently created a deadly threat to Elena?

What did you think of last night’s show? Sound out in the comments below and let us know what you think about our questions!  If you dare to see some SPOILERS and a sneak peek video of the next episode which will air in two weeks called Bringing Out The Dead go HERE.