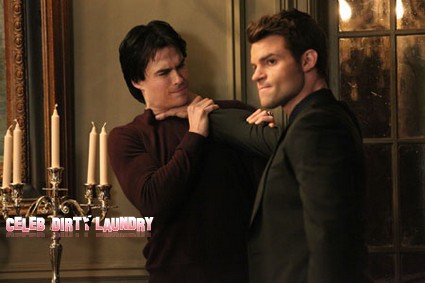 Last night was all about The Originals on the CW’s hit show The Vampire Diaries and we recapped it for you.  Episode 13 ‘Bringing Out the Dead’ was all about seeing Klaus (Joseph Morgan) fall at the hands of his family who he thought he could trust.  When Elijah turned on Klaus it looked like someone punched him.  In our wrap-up we have some observations of last night’s show and some questions.

Best line of the night tonight by Damon about Stefan.  “Makes me nostalgic for the time when my brother was a bunny-stroking pacifist.”

I don’t know about you but I did not really care for Klaus character in the beginning but now I really like him.  He is so interesting and complex and not hard on the eyes.  What do you think about James Morgan as Klaus?

Klaus’ mother is back and she wants to have one big happy family again – that crew makes the Adam’s Family look like the Brady Bunch. How will mommy dearest react to Klaus’ patricide?  Can she bring back Michael the dear old dad?  Will she want to bring him back seeing as he was attempting to destroy Klaus who she obviously still loves?

What about mom’s feelings about Elena?  Will she try to destroy Elena the doppelganger to prevent the creation of more Hybrids.  Of course that will depend on her feelings about hybrids. Will mom and Klaus fight over Elena’s fate?

One thing for sure, mom’s reanimation definitely changes the power dynamic in Mystic Falls.

Do you love Matt?  He seems to always be in the right place and say the right thing, he just seems perfect!

Poor Alaric has been killed and revived by his magic ring more time than he would like to remember.  Who killed him this time? Who stands to gain by his death?

What will happen now that Stefan and Damon have both openly declared their love for Elena?  Will that make them closer or drive them apart?

What did you think of last night’s show?  I think it was one of the best of Season 3!  Sound out in the comments below and let us know what you think about our questions! If you dare to see some SPOILERS and a sneak peek video of the next episode which will air in two weeks called Dangerous Liaisons. go HERE.