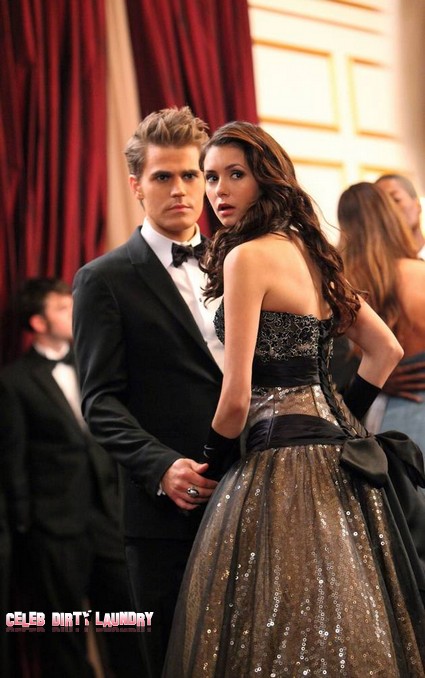 Tonight’s episode of the Vampire Diaries was really good, lots of action, some sadness and we met some of Klaus and Elijah’s family ‘The Originals’. A preview for The Vampire Diaries episode 14 has been released and it is called ‘ Dangerous Liaisons.’ We have a sneak peek of the episode, some spoilers and several pics from the episode for your enjoyment.

On tonight’s episode we learned more about Meredith Fells and we suspect there is a lot more to learn.   Bonnie and her mother got the sealed coffin open and I was surprised by who was in it.   Klaus tried to suck Elijah into one of his schemes but Elijah has smartened up and learned not to trust dear Klaus and he brought all his brothers and sisters back alive.  More people were attacked in tonight’s episode and we still do not know who is doing the killings.  If you missed tonight’s episode – go her for our not to be missed recap.

In next week’s episode Elena (Nina Dobrev) is surprised to receive an invitation to a formal ball, and when Damon (Ian Somerhalder) and Stefan (Paul Wesley) hear the party is being hosted at Klaus’s newly renovated mansion, they both insist on attending the event with her. Caroline (Candice Accola) and Matt (Zach Roerig) also receive invitations to the ball from unexpected admirers.

At the elegant party, Elena learns of a horrifying plan that could lead to numerous deaths and she must decide who she can trust wither her new information.  Caroline discovers a side of Klaus (Joseph Morgan) no one would have suspected. Finally, after an evening of violence and dashed hopes, Damon finds a new way to cope.

In the preview video Klaus mother is telling Klaus that for 1,000 years it has been her dream that the family could be as one.   The originals are having a ball and Stefan is convinced that there is more to the ball than a family reunion.  At the ball we see Elena in a beautiful ball gown and Damon tells her, ‘It would be rude not to dance you know.’  Then we see Klaus dancing with Caroline.  We have heard rumors that Caroline and Klaus have a budding romance.  At the end of the preview someone throws somebody off the balcony – I am not sure who it goes so fast.  Check it out and see if you can tell and sound out in the comments below and let us know!

When Caroline (Candice Accola) was recently asked what she was most excited for fans of the show to see, she immediately brought up “The Ball.”

“I’m really excited there’s an episode where there’s a ball. Everyone got to get all dressed up,” she says. “We took ball dancing lessons. It was really fun. I’m excited for people to see that episode for many more reasons besides the fact that we got to get dressed up, but I don’t want to give those reasons away. I’m just going to say because we got all dressed up, which is code for a lot of s–t goes down.”

The episode airs on the CW on February 9, 2012. Check out the preview video & the pictures below and let us know in the comments below what you think!