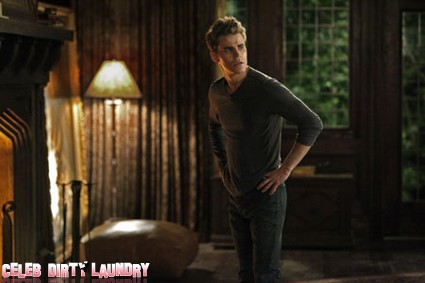 On tonight’s The Vampire Diaries it was all about The Mikaelson family and Esther’s plan to kill her children.  Tonight’s episode was not as exciting as previous weeks, but it was still great!  Did you watch the episode?  We did and we recapped it for you!  In our wrap-up we have some observations of last night’s show and some questions.

Elena was feeling guilty about her part in Esther’s plan to kill her kids because she didn’t think Elijah deserves to die.  Did you agree with Elena?  Is Elijah better than his siblings?

Stefan admitted to Damon that he has not drank human blood since he almost drove Elena off the Wickery Bridge.  Were you surprised?

Damon turned Bonnie’s mother into a vampire and Bonnie refused to see Elena because in a small part blames Elena for what happened to her mother Abby.  Do you think Bonnie should blame Elena?

Esther’s plan to kill her children failed.  Do you think we have seen the last of her?  I don’t!

We found out more about Dr. Meredith Fells tonight.  She is behind the killings in Mystic Falls – she also shot Alaric at the end of tonight’s episode.  I wonder what that means for Alaric and Meredith?

Rebekah reveals to Klaus that when Elena was in the cave she noticed a message in the paintings: There’s a white oak tree out there somewhere, a tree that has the power to kill Original vampires.  This should be interesting!

What did you think of Klaus and Caroline this week?  Do you still like them together?

What did you think of last night’s show?  Sound out in the comments below and let us know what you think about our questions! If you dare to see some SPOILERS and a sneak peek video of the next episode which will air March 15th called 1912 go HERE.