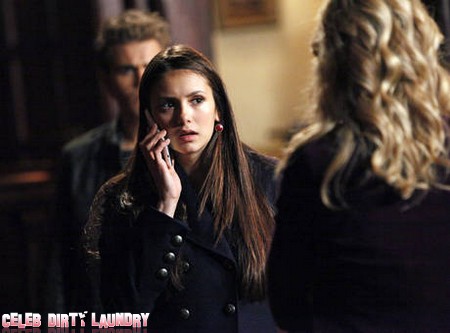 Tonight’s episode of The Vampire Diaries was called ‘The Murder Of One’ and it was a fast paced episode.  Damon and Stefan made stakes from the Wickery Bridge and they planned to kill Klaus.  At the same time Klaus captured Bonnie and was trying to get her to break the spell put on him by his mother that linked his siblings to him.  So it was a race to kill Klaus and a race to break the spell.  Meanwhile Rebekah managed to grab Damon and torture him – she was really mad at him for rejecting her.   There was so much in the episode if you missed it make sure to read our full recap HERE!

On the next episode ‘Heart of Darkness’ Tyler returns to Mystic Falls – Elena (Nina Dobrev) and Damon (Ian Somerhalder) set off together to make sure Jeremy (Steven R. McQueen) is safe in Denver, and to see if his special abilities can help reveal the information they need about ancient vampire bloodlines.  It doesn’t take them long to learn that Jeremy has been hanging with the wrong people.  Stefan (Paul Wesley) and Klaus (Joseph Morgan) both go to brutal extremes in their search for the missing weapon.  Caroline (Candice Accola) is thrilled when Tyler (Michael Trevino) returns to town, but Tyler soon suspects that something has been going on between Caroline and Klaus.  Matt (Zach Roerig) has his hands full trying to keep Rebecca (Claire Holt) busy organizing the school’s upcoming 1920s Decade Dance.

In the preview Damon and Elena are with Jeremy and Jeremy says ‘you traveled across the country to get me to talk to a dead vampire?’ The next scene is hot – Elena is in bed and Damon is taking his shirt off and she tells Damon: ‘Stefan thinks I have feelings for you’ and Damon replies: ‘do you?’  There is a lot of fighting after that scene, some kissing and it ends with Stefan saying: ‘No matter what I have gone through none of that matter  if she has feelings for someone else.’  There is a lot more – check out the video below and let us know what you think!

Meanwhile Ian Somerhalder and Nina Dobrev are almost done shooting season 3 of ‘Vampire Diaries’ and they talked about it on twitter.  Take a look at the post here!

‘’Heart of Darkness airs on the CW on April 19th, 2012 – we have to wait 2 weeks for our next Vamp Diary fix!  Check out the preview video below and let us know in the comments below what you think!