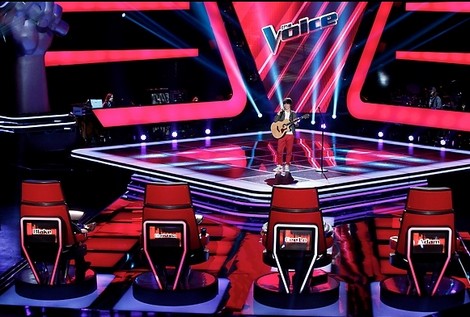 On last night’s show the blind auditions the second part of the blind auditions went off with a bang in the form of Adriana Louise – an above average and overly hyped contestant.   All four judges pressed their red buttons. In the end, Christina Aguilera was chosen by Adriana with the hysterical crying and screaming of Adriana’s mother in the production room.

The final contestant and one I consider the best last night came in the form of a mariachi singer named Julio Cesar Castillo who did a feverish rendition of Ritchie Valens’ “La Bamba” which prompted Blake Shelton and Cee Lo Green to spin their chairs around. Julio’s voice was exciting, catchy and feverish – this truly made the second episode of The Voice Season 3 a winner in our books. Blake was the mentor who won the mariachi man in the end.

Tonight’s premiere is going to be and exciting one, which you won’t want to miss. So be sure to tune in for our live coverage of NBC’s The Voice – tonight at 8PM EST!  While you wait for our recap, hit the comments and let us know how excited you are about the new season of The Voice.

Here we go, it’s night number three of the blind auditions and first to take the stage is Samuel Mouton who sounds radically different than he looks and he just totally relaxed and chilled everyone out. As Christina Aguilera put it, “I totally expected to turn around and see dreads on this guy!”  Everyone but Blake Shelton did turn around and after the fact, he totally regretted not doing so. Samuel opted to join Adam Levine’s team.

Chris Truesdale is a former boy- bander that once performed in Dream Street with Jesse McCartney. He’s thrilled to have the opportunity of a lifetime to take the stage alone. He moon walked away through the performance but no one turned around. Blake tells him at the moment he appears to be a dancer that sings and in order to make it, he has to reverse that.

Nelly’s Echo is a man that has been through hell. His father was falsely accused of a crime and he and his brothers’ used music to pull themselves through the hard times. He is originally from Nigeria until his family fled to the US and he hopes to inspire people now. He sang Ain’t No Sunshine and his voice was like butter. Christina and Adam both turned around and feel like it’d be an honor to coach him. Nelly chooses Christina because she was the first to turn around. I absolutely love this guy.

Alison and Crystal Steele are a mother-daughter duo that is actually part of a family band.  They do a great version of Carrie Underwood’s Before He Cheats and both Cee-Lo Green and Blake turn around. Blake tells them that he really wants them on his team and he also wants to protect their mother/daughter relationship because the business is rough.  Of course they choose Blake.

Domo is not lacking self confidence as she rattles off all the things she has done on her path to becoming a star. I wondered if she could back it up and then she cranked out The Pussycat Dolls Don’t Cha. Domo is hot, can dance and most definitely sing. I think the coaches suspected she’d be a handful so only Cee-Lo turned around. Christina wished him luck with his new “handful”.

Nicole Nelson is the last to perform tonight. She says she has made precious little money performing over the last ten years but loves it just the same. She belted out a rendition of Hallelujah that had the whole place on their feet. Everyone turned around and Christina says her voice excited her.  Adam is proud to have turned around first and Blake says that the song just kept getting better as the song progressed. Nicole struggled to decide but ultimately picked Adam.

Adam and Christina grabbed three for their teams,  while tonight Blake and Cee-Lo both have one new team member. Tune in next week for more excitement on The Voice!