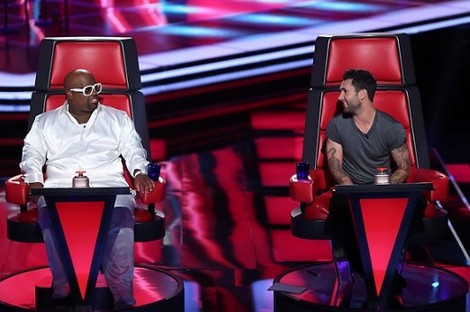 Tonight on NBC another fantastic evening of blind auditions is coming our way on The Voice.  Week two wraps up with the coaches competing for the best new voices.  Did you watch last night’s episode?  We did and we have a full and detailed recap here for you!

On last night’s show the most notable performance was from 16-year-old phenom Avery Wilson who spuns four coaches around with his “Without You.”  Avery grew up in a family of dancers and when he was seven, his father realized that he was really a singer. Avery felt like he owed this one to his dad who recognized his talent.

Adam loved Avery and could not believe that Avery was 16, he thought he was beyond his years. Christina could tell that he had had no singing lessons, she remarked you cannot teach him what he had. Blake hit his button out of absolute respect for his vocal abilities. Cee Lo showered him with compliments; he was humbled and inspired and felt that even he could become even better if he worked with him. Avery chooses Cee Lo.

On tonight’s show week 2 of Blind Auditions wrap up and or judges Adam Levine, Christina Aguilera, Cee Lo green and Blake Shelton continue their search for the perfect contestants for their team.

Tonight’s episode: Trevanne Howell is from the Bronx, New York, she is a single mother of two children. She has no regrets and is very happy at where she is at in her life. She is thinking I Have Nothing by Whitney Houston. Nobody turned around. Blake admits that there is nobody sadder than Cee Lo right now. Christina thought she had some good runs, but it was a little shaky. Cee Lo felt it was a little too strong. Adam felt it was ambitious, but a tall order.

Collin McLoughlin was in NYU and dropped out because he felt that he couldn’t do both school and sing. He is pursuing his dream, despite his parent’s wishes that he had stayed in school. Cee Lo is the first to turn around with Blake following second and Adam third. Blake claims he was the only one that started singing along when Collin told them to, he was sold right from the beginning. Christina found it was a little mellow for her. Cee Lo was really impressed and really enjoyed what he did. Adam thought he was pure and one of the best tones. Collin chooses Adam.

Joselyn Rivera was born premature, she was in hospital for years and didn’t talk for a long time. A doctor prescribed music and she just blossomed after that. Christina is the first to turn with Blake second. Blake says he wasn’t caught up in pushing his button, he was caught up in her. Christina would love to have her on her team to nurture her. Blake interrupts and tells Joselyn that Christina is abusive. Joselyn chooses Christina.

Benji Is a race car driver, but it requires money and he ran out. He loves singing and if music is in his future, it will happen for him. Adam is the first one turn around with Cee Lo excited to be the second one to turn around. Adam loved his scream. It was the real thing and his dynamic was amazing. Christina also loved his screams, he had really great moments with a little “Adam” tone in him. Cee Lo is at a loss for words, he thought he heart and soul. Benji chooses Adam.

Other singers that made it through tonight on Cee Lo’s team are; Todd Kessler, Ben Taub and Emily Earle.

Lorraine Ferro is 52 years old and she is a voice coach who has been singing her whole life, her mother was an opera singer. She is singing Skyscraper. Nobody turned around. Cee Lo tells her that she looks beautiful for 52, but her higher registers were a little high. Cee Lo felt there was a lack of control. Blake thought it was inconsistent and lacked a spark.

Mycle Wastman was raised by his grandparents after he lost both his parents. He was in the military, did construction, but never found he was happy until he found music. He is singing Let’s Stay Together. Adam is the first one to turn around with Cee Lo second and Blake third. Cee Lo thinks he is the total package and is more excited about him than anyone else. Adam thought he did an incredible job and wants him on his team. Blake thinks he is the best vocalist he head all day. Mycle chooses Cee Lo.