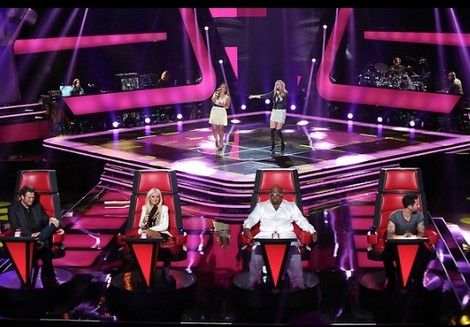 Tonight on NBC at 8PM The Voice returns with a whole new episode as the Blind Auditions continue.  Our judges Adam Levine, Cee Lo Green, Christina Aguilera and Blake Shelton continue to compete to land the very best artists on their teams.

The season started off last week with a bang with the three hour extended blind audition episode on Monday, Tuesday and Wednesday. We saw some pretty remarkable contestants, with the exception of a few over-hyped auditions.  If you missed last week’s premiere week you can read our full and detailed recaps here ->  Part 1, Part 2 and Part 3

The most notable performance of last week came from Nicole Nelson who did a cover of the seminal hit “Hallelujah” by Leonard Cohen. Her audition garnered critical praise from the judges and the audience. Her vocals were exquisite and her performance was classy. Her unaffected and technically perfect voice reached the upper stratosphere of one of the biggest songs of a generation of music lovers. Her audition was by far the best audition this entire season.

On tonight’s show the blind auditions continue as the judges attempt to find the best team members for their teams.  While you wait for our recap check out the video below with a sneak peek of tonight’s episode

Tonight’s episode: Last week the greatest singing competition returned with it’s third season showing us some of the biggest talent ever. Adam  and Blake each have five amazing vocalists, Cee Lo has four of his own and Christina leads the coaches with seven in the making. Tonight the blind auditions continue and the competition heats up.

Melanie Martinez finds that music is like telling a story, the same thing she does in her photographs and she is hoping that her voice will touch the judges hearts. She is singing Toxic by Britney Spears. Blake is the first judge to turn around with Adam second. Cee Lo took awhile, but he is third to turn around. Blake wanted to someone to have a creative vision and thinks he made the right choice by turning around. Blake wasn’t hearing anybody else but Melanie who doesn’t sound like anyone else, he thinks she’s a star. Cee Lo liked the high notes and loves the way she looks and the fact that she plays the tambourine with her feet. Christina says that because the three guys turned around, she thought it was too much of a battle to turn around. Melanie wants to go with someone who will let her express her creativity. Melanie chooses Adam.

Cupid created the Cupid Shuffle in 2006 that went viral, but unfortunately it didn’t allow his talent to be unfold. He wants to be known more for being a “one hit wonder” and wants the judges help. He is singing Cupid. Nobody turned around, Cee Lo asks Cupid what he is doing on the show. Cupid answers that the song put him in a pigeon whole and he wants out. Christina says he was very entertaining. Cee Lo asks him to sing something else and when he does, the judges love it. Cee Lo says he didn’t turn around because he didn’t want anyone to sing the Cupid Shuffle but Cupid, he had no idea it was him. Adam thinks he would have made it if he had done something else, Christina feels bad.

Brian Scartocci has two children and he met his wife in high school, he feels that because they were so young is the reason that the marriage didn’t last. He is following his dream to show his children that he can, he is determined not to go home empty handed. He is singing Isn’t She Lovely by Stevie Wonder. Adam turns first, with Blake and Cee Lo following. Adam tells him that it is a tough one entering into Stevie Wonder land and he killed it, he loves that he didn’t look the part. Cee Lo thought the song felt really sweet, it was solid and stylistic. Blake tells him that they are from different worlds but have serious chemistry. Christina says she really loved his rasp, but again, the three guys pushed first so she let them have him. Adam tells Brian he would love to arrange for him to sing with Stevie and Blake can’t believe that he pulled that. Brian chooses Adam.

There have been several duos that didn’t make it through; Vanjess, Maddie & Julia, The Wadsworth Sisters.

Up next is a married couple, Beat Frequency’s and they hope they are the duo that make it through. They met in church and it was love at first sight, they have given up everything for this one performance. They are singing E.T. Christina is the only one to turn around and knows that it is a tough song, she is happy to have Natasia and Shawn on her team. Cee Lo thinks they are the best duo so far. Adam thought they were super powerful singing together. Blake had half a mind to hit his buzzer but didn’t because they are from completely different types of music.  Beat Frequency’s is on Christina’s team.

Tyler Lillestol is a baseball player that has given up his career for his true passion, singing and is ready to hit it out of the park. He is singing You Got It Bad by Usher. Nobody turned around, Adam thinks that was a hard song to shine on and it affected him. Christina says they have raised the bar and are sometimes very critical but overall it was a good job.

Liz Davis is a country girl, she likes fishing and riding a four wheeler. At 19 she dropped out of college and moved to Nashville. She finds it highly competitive but she is determined. Liz wants to be the first person on the voice to be country and win it. Christina is the first one to turn around with Adam second. Blake finally turns around, just before the song finishes. Blake is not going to try to sell himself as the country guy, he pulls out his ACM award for Country Male Vocalist as a bargaining tool and he says that he doesn’t have connections in the country music industry. Christina wants to be her coach and promises to support her 100%. Adam thinks she is wonderful and beautiful. Liz chooses Blake.

JR Aquino is from Anchorage, Alaska and he’s a big on Youtube, he has 45 million plus views and in the top 100 subscribed musicians in the world. He wants to be known for more than just his singing on YouTube. He is singing Just The Way You Are. Christina turns first, then Adam. Cee Lo also turned around, just in time. Adam thinks JR sounds a lot like Bruno Mars and would love to have him on his team. Christina liked his pitch. JR goes on to tell the coaches his YouTube stats and they are impressed. JR chooses picks Cee Lo.

Algina Alvarez was already signed when she was ten years old by Sony but her career hasn’t gone far and she is a struggling artist. Her family has moved to Los Angeles just to help her pursue her dream. This next song could change her life so she hopes she hits every note. She is singing Turn The Beat Around. Nobody turns around. Blake says the he is embarrassed for all four of the coaches for not turning around. Christina thought it was so powerful that it stunned her from turning around. Adam is a fan and they are all regretful for not turning around.

Nicholas David has two children with the love of his life. After college he joined a band and drank a lot, then he ate so much that he weight 300 pounds. He met his light, the love of his life and it woke him up to a life that he knew he was supposed to have. He shed the weight and dropped the booze, he wants to share his message of hope. He is singing Stand By Me. Cee Lo is the only one to turn around. Adam thinks he was awesome, Christina loved the unique quality of his voice. Cee Lo loved his unique style, he spoke to him. Nicholas David is on Cee Lo’s team.

Alessandra Guerico is 17 and she attends Laguardia High School for the performing arts, known as the fame school. They perform every day in school and she admits, she hasn’t told anybody she is auditioning on the show. She is singing The Climb. Adam is the first one to turn around, Cee Lo is second. Adam felt there was some inexperience early on in the performance, but her age explains it – still it wa a fantastic job. Cee Lo thought it was a great vocal performance, awesome. Christina found it was a little too sweet. Alessandra chooses Adam.

Some other performers that made it through were 15 year old Adanna Duro who  made it on Adam’s team, Kelly Crapa made it on Blake’s team and 16 year old Paulina who made it on Christina’s team.

Avery Wilson grew up in a family of dancers and when he was seven, his father realized that he is really a singer. Avery feels like he owes this one to his dad who recognized his talent. He is singing Without You. Adam is the first one to turn around, with Cee Lo next and Christina following right behind. Blake is the last coach to turn around; Avery has to choose between the four of them. Adam love it and can’t believe that Avery is 16, he is beyond his years. Christina can tell that he has had no singing lessons, you can’t teach him what he has. Blake hit his button out of absolute respect for his vocal abilities. Cee Lo could shower him with compliments; he is humbled and inspired and feels that even he could become better if he works with him. Avery chooses Cee Lo.

Adam now has nine singers on his team, Blake has seven, Cee Lo has seven and Christina has nine.