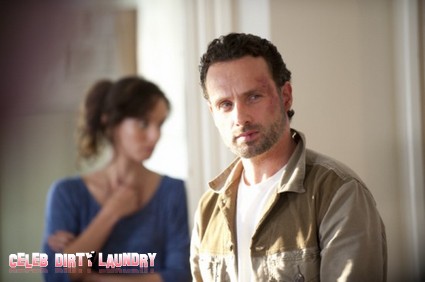 Tonight The Walking Dead returns with a whole new episode called ’Judge, Jury, Executioner.’  Stay tuned as we live blog the show with all the up-to-the-minute results.  Tensions are developing between Rick and Shane on The Walking Dead. The biggest difference between the two is that Rick practices a philosophy that drives him to keep the group safe at all costs while Shane’s philosophy is to cut his losses.

Meanwhile , in a shocking turn of events, AMC has let it slip on their website that Shane is leaving the show.  How do you think AMC will get rid of Shane? Will Rick’s jealousy over Shane’s former relationship with Lori finally explode?  Check out the major spoiler here!

On tonight’s show Rick sides with Shane on an important decision, causing Dale to worry that the group is losing its humanity. Carl’s actions have unintended consequences on the group.

RECAP: Daryl is beating the crap out of Randall in the barn, he finally confesses that there is 30 in his group, they have lots of heavy weapons. He tells Daryl that in his group, the men go out at night and once they happêned on a camper with a man and his two teenager daughters and while the other guys in his group attacked the two girls, they made the father watch.

Daryl tells the group about what Randall confessed and he thinks if his group arrives on the farm, they would kill all the men and their women would wish they are dead. Rick wants to kill the kid, Hershel tries to stop him, puts guilt on him about his own son Carl and what this would look like. Rick agrees to give him a bit of time, but for the safety of the group, the kid must die.

Hershel goes to see Andrea and asks her to watch over the prisoner. She is outside the barn and Randall tries to talk to her. Meanwhile, Shane walks up and asks Andrea if he wants to go in the barn and take care of this right away, is she going to stop him. Shane tells her that if they pussy out on taking care of this, there are going to be big problems. Andrea reminds him that Rick is in charge of the group and Hershel owns the farm. Meanwhile, Randall is listening to the whole thing when Carl sneaks into the barn, he is sitting on the loft at the very top.

Randall lies to Carl, tells him that he is lucky to have his family because he does not have his any more. He goes on to say that he will take him and his dad with him and protect them, all of a sudden Shane opens up the barn door and get’s Carl out of there.

Dale finds Daryl out in the woods building a fire, he asks him to side with him by saving Randall’s life. Daryl tells him that he wants nothing to do with it because he considers the group to be broken.

Lori is looking for Rick, she finds him in the barn and tells him that the nights are getting colder, he suggests they speak to Hershel about maybe staying in the house. They start talking about Randall, Lori supports his decision if he thinks it is best. Shen then asks what happened on the road between he and Shane, Rick turns around and tells her there won’t be anymore problems from Shane.

Dale is now pleading with Hershel over Randall’s fate. Hershell does not want to know, he tells Dale that it is all in Rick’s hands, he just wants to protect his daughters, he wants nothing to do with it.

Carl finds a gun and decides to go for a walk in the forest, when he gets near the stream he sees a Walker but it can’t move because his feet are stuck in the mud. Carl teases the Walker by throwing rocks at him.

Dale meets up with Shane and tells him that he is going to change his mind. He tried to convince him to not let Rick kill Randall. Shane tells Dale that he’s wrong, the kid will kill someone.

On the porch, Lori walks over to Rick and tells him that it is almost time. Meanwhile, Carl is still playing cat and mouse with the Walker cause he knows it can’t move being stuck in the mud. All of sudden, the Walker is loose and Carl falls down, drops the gun. The kid gets away, but is really lucky that he did.

Back at the house, everyone is gathered. Everyone is giving their opinion on Randall’s life. Dale is pretty much the only one that wants to spare the child’s life and is desperate trying to get everyone else to agree. Hershel asks if they can drive further out and drop him off somewhere, but everyone agrees that it could lead to danger for whoever drives him out. Dale is struggling to keep his stand, but everyone else is pretty much agreeing with Rick.

Rick gives the floor to anyone else that has something to say and nobody speaks up, except for Dale who is now reduced to tears begging them to do the right thing. Nobody stands with Dale, until Andrea speaks up and says they should find another way. Dale sarcastically asks if they are all going to watch, then he says he won’t be a party to it, walks near Daryl and tells him this group is broker, then walks out the door.

Rick, Shane and Daryl head to the barn. Shand blindfolds Randall and Rick asks him if he has any final words. Rick is just about to shoot him when Carl walks in and tells him to do it. Shane walks over to Carl and gets him out of the barn. Rick tells Darl to take Randall away, he doesn’t shoot him and announces to the group that they are keeping him in custody until now.

Rick tells Lori that Carl followed them and wanted to watch, he just couldn’t shoot Randall then. Dale is by himself out in the woods, he finds a cow in bad shape. While Dale is looking down on the cow, a Walker, the same one that Carl was playing cat and mouse with, jumps him and opens up his stomach wide. Rick wants to move Dale and Hershel tells him that he won’t survive. Dale is going to die and Carl is on the scene, he realizes it is the Walker he was toying with. Andrea is beside herself, Dale is suffering. Rick pulls out his gun and tries to shoot him but can’t, Daryl takes the gun and shoots him, while saying “sorry brother”

That’s it for tonight, OMG what a freaking amazing episode! Only two left till season two is done.