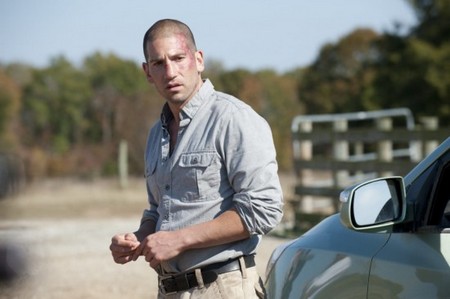 Tonight’s episode was simply amazing! Did you manage to see the full episode? If you missed any of it, you can read the full recap HERE.   In our wrap-up we have some observations of last night’s show and some questions.

I found Dale’s funeral was a little boring, what did you think about it? Did you like Rick’s eulogy, did you find it honored Dale? When Shane, Daryl, Andrea and T-Dog found the Walkers having a picnic over something or someone’s remains I thought I was going to faint, this has to be the most disgusting scene ever. Did you find that scene the grossest, or is there another one that creeped you out even more?

Nobody likes Shane any more, but who does Carl confide in? Didn’t you think it was honorable that Shane went and told Rick about the gun Carl had? I think he did the right thing and Rick did end up taking his advice and talking to Carl instead of having Lori do it..

What did you think of Lori finally being real with Shane? I was happy she did it, I was really thinking she was some vile bitch before tonight’s show, she redeemed herself. Don’t you think it was about time that she thanked Shane for always being there for her and Carl?

Rick has a heart to heart with Carl, I thought it was overdue, didn’t you? If Sophia was taught to use a gun, maybe she would still be alive.

I was shocked tonight that Shane made such an outrageous plan to kill Rick. What did you think about that, did you know it was coming? Shane broke Randall’s neck to kill him and then he turned into a Walker without having bites on him, why didn’t Dale turn into a Walker last week when he died?

Daryl is the smartest guy in my opinion, he knew something was not right, he could see the signs. Don’t you think that he should be utilized more since he has some really great skills and survival instincts?

Rick finally figured out that Shane was going to kill him, I was so shocked, I really didn’t think it would come to that, did you? When Shane taunted Rick I thought he was going to shoot Shane, were you surprised that he stabbed him?

Killing Shane was a shock, but when Shane got up and turned into a Walker, I was speechless, were you? Carl finally manned up and shot Shane the Walker and saved his dad. I loved that part, what did you think about it?

Carl’s gun shot awakens a swarm of Walkers that are going to attack next week. Tonight’s episode was by far the best one so far, but I have a feeling next will be even better, don’t you?