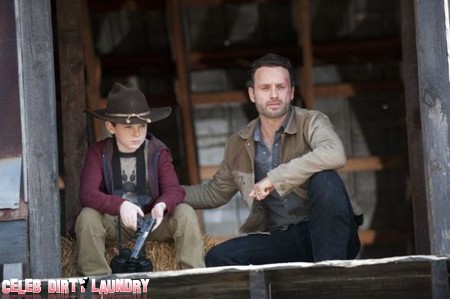 There are only two more episodes left to season two, are you as excited as I am to see what happens? Last week, Carl’s little dalliance cost Dale his life and it’s pretty obvious from the sneak peek that he didn’t tell Rick about it.

In the next episode, Rick shockingly gives Carl a gun. I was feeling pretty sorry for Carl before last week’s episode, you know, being so young and having lost Sophia and all. But now, after he played a game of ‘cat and mouse’ with a Walker, I’m thinking someone needs to set this kid straight. Somewhere, when I wasn’t looking anyway, Carl stopped being a kid. Stealing Daryl’s gun, baiting a Walker and telling your father to shoot a prisoner, this kid is clearly, no longer a kid. Did you see last week’s episode? If you missed any of it, you can read all about it in our full official recap HERE.

In the sneak peek from “Better Angels” (below), Rick and Carl have a father-son talk, is it enough?  Will Carl tell Rick his part in Dale’s death? Or, will he kill someone now that he has his own gun? Apparently Rick gives Carl the gun because he’s tired, he says “I’m tired, son. Please, take it.”  I’m going to go with Carl shooting someone and if the story stays true to the comic book, he will shoot Shane.

Now, talking about Shane, he does get a surprise this week when Randall tries to escape and he clobbers him right in the face. At Dale’s grave, Lori confesses that she’s made mistakes, duh, like we didn’t know that.

Dale’s death prompts ‘moving day’, everyone is moving into Hershel’s house and this should be fun, if the Walkers don’t get them, they will all drive each other mad. I can just imagine how good Daryl is going to get along with everyone, not! And, will Lori give into the sexual tension between her and Shane? You know as well as I do that she’s still in to him even though she says she’s not because she wants to play ‘family’ with Rick.

I hear there will be more deaths before season two is out, not just Shane’s, which I’m not happy about, are you?

This show really KICKS BUTT, I can’t wait for season three! Sadly, it will be long wait, the next season is said to be scheduled only for October of this year.