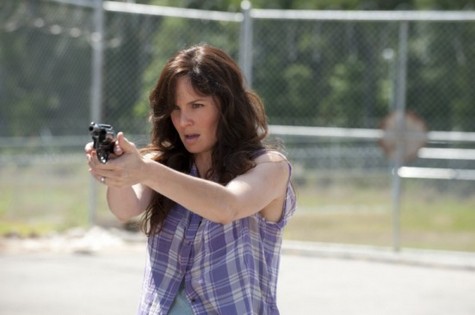 Tonight on AMC is an all new episode of THE WALKING DEAD called “Killer Within.” On tonight’s show The group is severed and lives are put in jeopardy. In Woodbury, Merle has a request for the Governor. Did you watch last week’s season 3 episode 3? We did and we recapped it here for you!

On last week’s show Andrea and Michonne found some new survivors and they had to make a critical decision. Things were moving rather quickly on The Walking Dead and the Governor’s crew was soon introduced. Andrea and Michonne discovered a perplexing smoke plume which actually turned out to be a helicopter crash.  Andrea found herself blindfolded and Andrea and Michonne and were taken to Woodbury where their  weapons were taken from them and they felt like prisoners.  We got a peek at Merle, Daryl’s brother who is back and living in Woodbury!

On tonight’s show Rick, Beth, Darryl and T-Dog go outside to clean up the dead bodies and look for Maggie and Glen to help, it turns out they are in the guard tower making out ’cause it’s important of course to get it on during a zombie apocalypse when everyone around them is drying! Someone was watching Carol perform the C-section last week, was it maybe Merle that was watching her? Rick and the group will find the Governor’s compound, but before that they are taunted in a game of cat and mouse. Eventually, the group does put all the pieces together and they do realize that the Governor is nuts, how else can you describe a guy who spends his evenings staring at a collection of severed heads like it’s a big-screen TV.

Tonight’s episode: A deer is torn in half and given as bait to two walkers so someone can escape the prison; this person also breaks the gate – but we are not shown who it is.

Meanwhile, Rick, T-Dog, Lori and Daryl call out of Maggie & Glenn who spent the night in the guard tower when the two inmates approach them and admit they can’t live in their section of the prison anymore because there are too many bodies and they just can’t live their. They beg Rick to stay with them and he tells them to either live in their cell block or leave.

The two prisoners admitted to breaking the law in the past, but they’ve paid their dues and declare that they deserve to live. T-Dog doesn’t want to send them packing but Lori and Maggie do.

Meanwhile, back in Woodbury, Michonne is still very distrustful and keeps snooping around until the Governor catches her. He tells her that he heard she and Andrea are leaving and thinks it’s a shame because he could use women like them.

Back at the prison, Rick tells T-Dog that they will the prisoners one week of supplies then set them on their way – T-Dog is not happy with the decision.

Hershel is up on crutches, he admits he cannot sit down and look at the bunk anymore. Lori doesn’t want Hershel to go to far but he wants to take a stroll.

Michonne is with Andrea, she tells her that she wants to head to the coast where she thinks it may be safe. While Michonne is eager to leave, it now appears that Andrea is not so eager to leave.

Glenn leaves the supplies with the prisoners and the rest of the group head back to their side of the prison only to find Hershel outside on crutches. All of a sudden, there are dozens of walkers coming at Hershel, Lori, Beth and Carl. Rick and the rest of the group are frantic and try to get into the prison, Rick releases the two prisoners so they can help. Hershel, Lori, Beth and Carl make it inside of the prison and in a cell for safety. Lori is trying to fight off the walkers with T-Dogg helping, then OMG, a walker bites into T-Dogg’s shoulder!

Flash back to Woodbury, Andrea gives Merle all the information he needs to find Rick and the group, she tells him where she last saw them, Hershel’s farm. Andrea asks Merle about the Governor, he assures her that he is a good man and took care of him when he found him in bad shape.

Back at the prison an alarm is sounding and more walkers are headed their way. Meanwhile, T-Dogg is alone with Carol and he knows he is going to die. In another part of the prison, Lori is going into labor and Maggie and Carl and still fighting off walkers and looking for a safe place.

At Woodbury, the Governor is enjoying a game of golf when Merle approaches him and says that he wants to go look for his brother that Andrea says is still alive. The Governor warns that someone could get hurt on this search and Merle tells him that he will go alone then but the Governor is against it because he needs him at Woodbury. In the end, the Governor makes a deal with Merle, he gets more information and he will go with him himself.

In the prison, Rick is frustrated, alarms are going off and he has no idea where Lori, Maggie and Carl have gone to. Lori going to give birth, walkers or no walkers. Maggie is going to deliver the baby and Carl offers up his help. All of a sudden, Maggie tells Lori to stop pushing something is wrong.

Lori and T-Dogg are attached by walkers and he offers up himself as bait so Lori can take off to safety, T-Dog is eaten to bits.

The Governor sits down with Andrea and discuss her leaving with Michonne, he offers her a drink and she refuses. He then asks her about her family and explains that she has lost everyone. The Governor tells her that he lost his wife in a car accident before “this” all happened, he only has his daughter. Andrea decides to take the drink and tells the Governor that she doesn’t know what matters now. When the Governor gets a little deep with the conversation, Andrea tells him that she has to go, he then tells her his name, Phillip.

At the prison, Rick, Daryl and one of the prisoners find the generator, there is another prison in the room that was not with the original two and he fights Rick down and almost kills him, but the other prison shoots him dead and saves Rick, proving his loyalty and most likely securing his place with the group.

Lori is bleeding like crazy and the baby is not born, she tells Maggie that it means that she has to cut her open, she will not lose the baby and begs her to do it with Carl’s knife.

Andrea has changed her mind about leaving, she approaches Michonne and tells her that can postpone and leave in another few days.

Lori tells Carl to take care of his baby sister and Rick, to always do what is right – she knows she is not going to make it through this. Lori coaches Maggie through the c-section with Carl’s knife. Lori’s last words are, “Goodnight love”, the baby is born and lets out a small cry. Someone has to shoot Lori or she will turn, Carl tells Maggie that he will do it. Wow, that kid is going to turn into one serious bad ass after shooting his own mother.

Glenn, Rick and Daryl happen upon whats left of T-Dogg while two walkers are feasting on him.

Outside in the prison yard, Rick, Daryl and Glenn find Beth and Hershel with Carl, Maggie and the baby not far behind them.

Rick has a complete breakdown, he falls to the ground and hugs his knees like a baby, crying and hysterical realizing that Lori is gone.