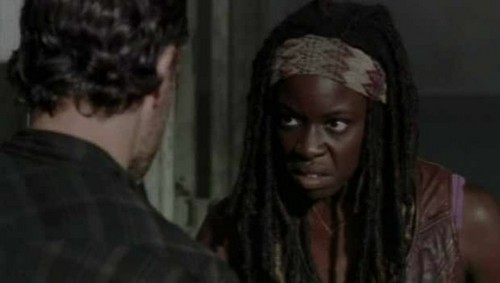 Tonight’s episode of THE WALKING DEAD “Hounded” had no lack of thrill and shock! Did you see the episode? If you missed any of it, you can read our full and detailed recap HERE.

Tonight’s episode had us wondering who Rick was on the phone with and guess what, it was his dead wife Lori!  Well, at least in his mind anyway and the good thing is that this phone call helped him to bring closure to his wife’s death and accept his new baby girl. The episode had no lack for drama and action, personally I was very excited to see that Carol is alive and it only seemed right that Daryl found her. Tonight I definitely got my fill of zombie killing and the most gruesome was Michonne’s message for Merle. Tonight we are left thinking that we should, “forget walkers, in this apocalypse, it’s people we are afraid of”.

Spoiler alert: If you’re one of those people who doesn’t like spoilers, stop reading now! We have some juicy spoilers for you about the season 3 episode 7 of AMC’s “The Walking Dead.”

Official HBO synopsis of next week’s episode: The governor seeks information; a new guest at the prison forces Rick’s hand.

Next week, Michonne ends up at the prison with some walkers and I was shocked at first to see that they didn’t try to kill her right away, but don’t worry, next week they come after her behind the prison gate and she does some creative slicing and dicing until Rick takes her in. Michonne then goes on to tell Rick and the group all about the Governor and his dirty little town of Woodbury, she also tells them about Maggie and Glen’s abduction. I got a feeling the Governor is going to have a run for his money with Michonne and Rick teamed up together.

Meanwhile, Glenn and Maggie are taken to Woodbury and Merle gives the Governor his twisted version of what happened that brought the two there. Merle claims to have killed Michonne – when he inevitably reunites with his brother and everyone finds out that Michonne is with the group, he is going to have a lot of explaining to do.

Where do we go from here? Glenn and Maggie are behind the enemies’ wall. There is a major clash around the corner and nobody is safe. Daryl is going to take down his brother, hopefully sooner than later, Merle gives me the creeps.
The Governor had a good roll in the hay with Andrea tonight, but the budding relationship is going to be short lived, rumour has it that he’s not long for The Walking Dead world.