“The Walking Dead” Season 3: Spoilers and Previews — War Looms on the Horizon! 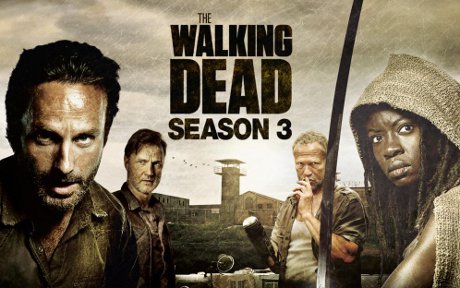 The Walking Dead left all you zombie fans high and dry when it left for its mid-season break, but this February it’ll return with enough undead crazies to whet that apocalyptic appetite of yours. If spoilers make you uncomfortable in any way, then please divert your attention now, because we have a lot of look-aheads for those hardcore fans who simply can’t wait until February.

While the end of the last episode left us all anxious, the showrunners are going to keep throwing craziness at us. The characters you have grown to love have battled zombies, and they’ve gotten quite good at lopping off their heads and warding off hungry predators, but in the second half of season 3 Rick and his cohort will face another enemy. The Governor.

It was only a matter of time before the Governor, who likes to collect floating zombie heads in a secret hideaway spot (can you say crazy?), set his sights on the prison. Everyone better prepare for a war, because that’s probably what it’s going to be. Rick and his team have fought enough enemies in their time to know how to fight, and they definitely won’t go down quietly. Glen Mazzara promised this season would be one of major death (amongst main characters), so we have to wonder who will get the axe?

Season 3 Episode 9 “The Suicide King” will air on Sunday, February 10th at 9pm ET. In this episode, Andrea is in the arena and she recognizes Daryl. She pleads with the Governor (like I said, one crazy dude) to save his life. But I think you all know where that plea leads. She doesn’t get far with the Governor, who ultimately says her friend’s fate isn’t in his hands anymore.

It’s almost a sure thing that everyone who is near and around the prison will unite to thwart the Governor and the crazies of Woodbury, but we’ll see what becomes of this imposing dilemma. The end of season 3 promises a lot of human vs. human conflict, so it will be interesting to see what role the zombies play in this skirmish.

Looking ahead at the coming episodes, here are a few very brief spoilers to get you looking forward. According to Examiner, the following statements are mere speculation and should be taken with a grain of salt. However, they seem plausible enough.

“Home” : The group prepares for their next move. Rick goes in search of his lost friend, while Daryl and Merle consider whether they have made the right choices. The Governor tries to restore order in the town of Woodbury and is planning to punish the people responsible for the chaos.

“I Ain’t Judas”: Rick and the group have to make a choice now that their safety is no longer guaranteed. Andrea feels uncomfortable now that Woodbury has become a police state.

Let us know what you’re looking forward to most. Also, please don’t hesitate to leave us your thoughts and speculations. What do you think will happen before the show’s finale?