The Weight Debate – Jessica Simpson Fat But Not Kate Upton? 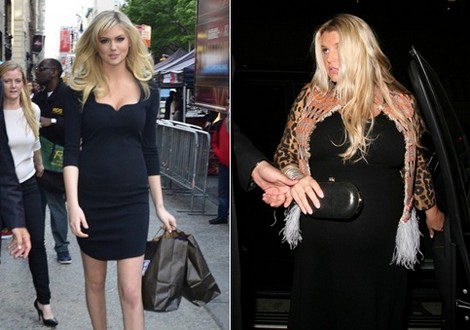 Let’s get something straight right off the bat. Kate Upton is not fat. Jessica Simpson is fat. Do we have that clear? Good. Now it’s time to talk about why neither of those things matters so we can all move on with our lives.

I have never been a Jessica Simpson fan. Her music is irritating at best and comparing her personality to that of a small, yappy dog would be an insult to small, yappy dogs everywhere. No, I don’t much care for Jessica Simpson so I say this not out of some fan girl sense of loyalty but out of respect for a fellow woman. Leave her the heck alone. She’s fat. She knows she’s fat. She does not need the entire world calling her on it.

Put yourselves in Jessica’s shoes for a moment. You were young, sexy and had a body tailor made for bikini season. It’s been a few years and you’ve struggled with your weight, to say the least. You get pregnant for the first time and want to enjoy the experience so you toss those old diet rules out the window. You’ve now had your baby but that baby weight isn’t coming off quite as quickly as you expected. How do you feel about that? Let me help.

You probably feel frustrated. Your self esteem has seen better days. You’re starting to wonder if you’ll ever feel good when you step on a scale again. It sucks. It’s really that simple. It just plain sucks. Now imagine the entire world (or what probably feels like it anyway) is cracking jokes at your expense. The entire world is mocking you and sneering at you. How much worse would that make everything? That’s probably what Jessica Simpson is feeling right now – hurt, defeated and depressed. This isn’t the time to pile on and make things worse. It’s time to back off and give Jessica the benefit of the doubt.

It’s pretty common knowledge at this point that Jessica is the new face of Weight Watchers. On September 10, Jessica will be appearing on Katie Couric’s new show to discuss Weight Watchers and her own personal struggle with weight but she’ll also be showing off her new body. According to sources close to Jessica, she’s lost almost forty pounds but a lot of people question the validity of that report.  Celeb Dirty Laundry broke the story that Life & Style used an old photo-shopped image of Jessica in their weight-loss cover story on September 5th.

A lot of people are expecting Jessica to fail. I’m not one of them. I don’t know what Jessica will look like when she makes her appearance on Katie’s show but I know what I’d like to see. I’d like to see a slimmer Jessica sitting down with Katie because while I’m not really a Jessica Simpson fan, I am a big fan of seeing haters eat crow.

I do worry about Jessica though. I worry about her the same way I worry about super skinny women who look like they haven’t eaten a good meal in weeks. Being one extreme or the other just isn’t healthy. Putting pressure on Jessica to lose weight or putting pressure on ultra-thin women to gain weight doesn’t do anyone any good though. It makes it harder for women to love who they are. It makes it harder for women to be comfortable in their own skin. As a woman, I find that completely unacceptable. This brings us to Kate Upton.

Kate Upton is gorgeous. She’s just stunning. She has an incredible, curvy body and she seems proud of that body, as I think she should be. Kate is not fat. She’s not stick thin, but she’s certainly not fat. Since when is it okay to treat other women this way? Life can be hard for women. We have to support each other. We need to help each other out. Bloggers have, somewhere along the line, decided that it’s okay to be snarky and cruel to celebrities because celebrities aren’t real people. They don’t feel pain, right? They don’t have feelings that can be hurt. The problem there is obvious. They are real people with feelings. Maybe it’s time to have a little respect for each other. How can we expect to be respected as women and as human beings if we’re so nasty and catty to each other all the time?

Now let’s take a moment to discuss a growing movement I’m seeing around the internet these days – the “real women have curves” movement. While I think the intentions behind the movement are good and worthy of supporting, there has to be another way to say it because skinny girls are real women too. I was chubby when I was a teenager. I hit 23 or 24 and started shedding weight like nobody’s business. I don’t entirely know what happened. People thought I was sick. Rumors spread that I was on drugs. Truth is, I’m pretty healthy and am completely drug free. I just lost weight. I’ve been told it had something to do with my metabolism. Considering the exact same thing happened to my mother when she was in her early twenties and she’s still a size 2 to this day, I’m guessing it’s probably true. Does that mean my mother and I aren’t real women? No. It just means we’re skinny.

So what makes a real woman? To my understanding, a real woman has a vagina. I’m pretty sure those are the only requirements. Are curvy women more beautiful than skinny women? That’s debatable but an old cliché comes to mind when I think of that question – beauty is in the eye of the beholder. I think curvy women like Sofia Vergara, Christina Hendricks and Kate Upton are beautiful but I also think Candice Swanepoel, AnnaLynne McCord and Adriana Lima are and I sincerely doubt anyone would refer to those three women as curvy. Let’s get rid of this real women are this and real women are that garbage and just say beauty comes in many sizes and body types. And let’s back off Kate and Jessica, okay? There are plenty of things in the entertainment industry to get all worked up about. How about we focus on those and stop placing so much importance on how someone looks in a bikini?