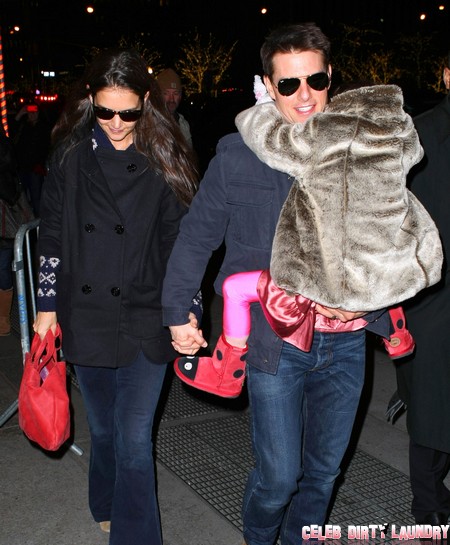 When Tom Cruise finally reconnected with his six-year old daughter, Suri, over the Thanksgiving holiday it had been more than three months since his last visit with her.  Since his split with Katie Holmes last summer it has been assumed that since she would now be considered an unbeliever of Scientology, Tom has likely been instructed to shun his former wife. Katie has primary custody of Suri which could make visitation a bit tricky.  Tom spending Thanksgiving with Suri was taken by some as a possible sign that he was not doing as he was told by his church leaders. Tom has declared his endless devotion (and plenty of dollars) to the cult and it seems unrealistic that he would totally turn his back on it, but hey, for Suri’s sake we could hope- at least for a little while.

As it turns out that holiday reunion between Suri and her father was put on the books a long time ago. It wasn’t an instance where Tom decided to put his youngest child first in his life, it was instead a situation of convenience.  After Suri’s scheduled week in England where Tom is working on a film, she was shuttled back to the states to join her mother for her real, everyday life.

It might be another three months (or more) before Tom sees Suri because Christmas will be spent with Katie and her family. According to Hollywood  Hiccups,

“Katie and Tom are focused on Suri and as part of their divorce agreement, Suri will spend Christmas with Katie. They are trying to be amicable and Tom will see Suri over the holidays – but on Christmas, Suri will be with Katie and her family.”

Tom will no doubt spend Christmas focusing on himself rather than insisting he squeeze in a bit of time with the child that he has called the light of his life.  How long do you think it will be before we see  more photos of very public daddy-daughter day?  Here’s what I wonder, is it Scientology that is keeping Tom away or is it that his career is the light of his life and parenting falls a distant second on his list?  Tell us your thoughts in the comments below!