Tom Cruise and Katie Holmes To Reunite And Marry? 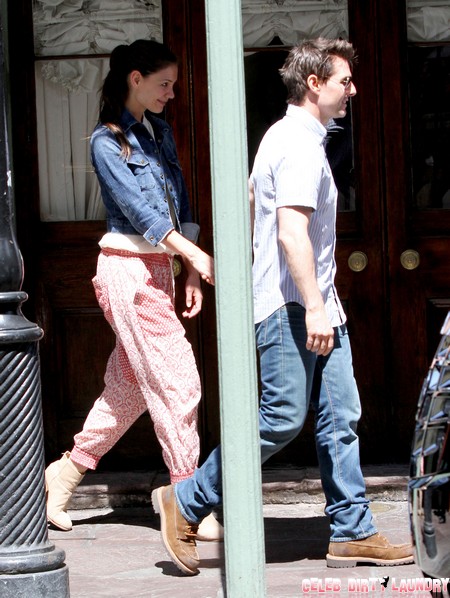 Will Tom Cruise and Katie Holmes remarry? Psychics – we go to them to find out more about our lives, our post-death existence and our relationships. No scientific method has ever been able to confirm psychical abilities, yet millions of so called “psychics” have been looking into cloudy crystal balls and predicted the future. It is no surprise that psychics also seem to delve into the entertainment world and “predict” the future of celebrities’ lives. The charlatans usually “see” the most outrageous reconciliations, and for some bizarre reason, each year there’s always a psychic who says a celebrity is going to do die that year. Celebrities die, they reconcile, they exist, not because they are pre-destined to do so, but because they’re semi-normal people with semi-functional lives. According to OK! Magazine, as reported by Jezebel, “a psychic predicts that Tom Cruise and Katie Holmes will play husband and wife to one another again.” Who is the psychic? Bruce Jenner?  The odds of Tom and Katy marrying again are the same as those of Jennifer Ansiton and Brad Pitt.

A while ago there was a now defunct show on television called Flash Forward, where the characters were subjected to a quantum entanglement and experienced their own futures. No psychic would be able to pull this off, so the hogwash this one created about Cruise and Holmes is the biggest lie since Dancing with the Stars. We still stand by the fact that politics and reality television should not be mixed, but we upped the ante and now officially proclaim that the metaphysical should never be mixed with celebrity. Yes, we’re able to “predict” the future of certain celebrities – the Britney Spears meltdown, the Lindsay Lohan behavior and the Bristol Palin DWTS déjà vu – but this does not come from Celeb Dirty Laundry’s in-house psychic who sits in a pink room filled with dream catchers and smiles. It comes from natural celebrity habits and logical conclusions.

We write and live by an extremely important motto here at Celeb Dirty Laundry – “Question everything.” We do this, on a daily basis, until a “psychic” comes along and makes one of the most ludicrous predictions in the history of entertainment. Elvis is still dead, Marilyn Monroe wasn’t killed by the CIA, Bruce and Brandon Lee didn’t have a curse on their family and Honey Boo Boo is real. Stop conspiring with the psychics and rather stick to Celeb Dirty Laundry for our tried and tested scientific methods.