Tom Cruise Blows Off Son To Party All Night Again 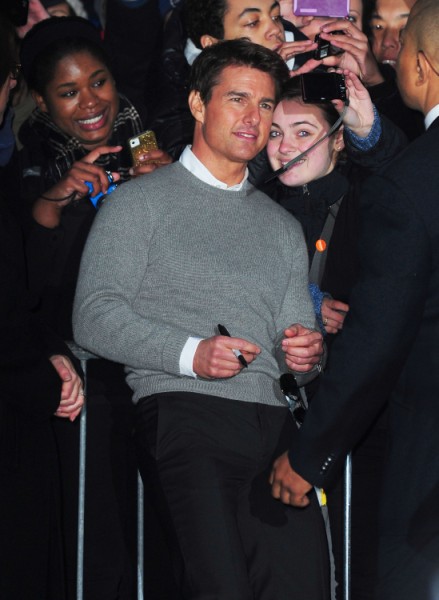 Remember all that partying Tom Cruise was doing while shooting in London and not seeing his daughter Suri and threatening to sue tabloids over calling him out for not seeing his daughter Suri? Well, he’s taken it across the pond to NYC where he’s been busy promoting his new Jack Reacher movie. Without the whole Katie Holmes ball and chain, Tom’s living it up and ditching his son, Connor Cruise, to do it.

Well… sort of. Page Six has a fun story today about the party monster. On Monday night he was supposed to go out after he filmed the David Letterman show to watch his son spin at a club. Connor’s trying to make it as a DJ and always manages to get high profile gigs. I wonder how?  Anyway, word spread that Tom was going to be at the club and he pulled out at the last minute because security wasn’t tight enough. But did he go home and put his feet up for the night? Hells no. Twinkle Toes had his dancing shoes on and he hit up Andre Saraiva’s Le Baron and stayed till 4 a.m., hanging with artists Nate Lowman and Aaron Young.

“It was great to see a big movie star hang out in the pit of Chinatown with the arty crowd,” a source said. “Tom arrived at around 11:30 p.m. and stayed till closing. He was dancing the whole time. Andre introduced himself, followed by Nate and Aaron. It was like boys’ night out” with another source saying, “Apparently [Tom] read about [the] party at Le Baron on Friday in Page Six and wanted to go check it out since he had never been there.”

Anyone else surprised Tom likes his guys night outs? What?! I’m just saying he’s probably still heartbroken over Katie and can’t bear to be around other women. That’s all!

So there was no blow off. Tom Cruise meant to watch his son but couldn’t for reasons out of his control. But dancing ’til 4 in the morning. Isn’t he 50? God, I’m lame but that seems so late. Anyone else want to peg this as a midlife crisis?