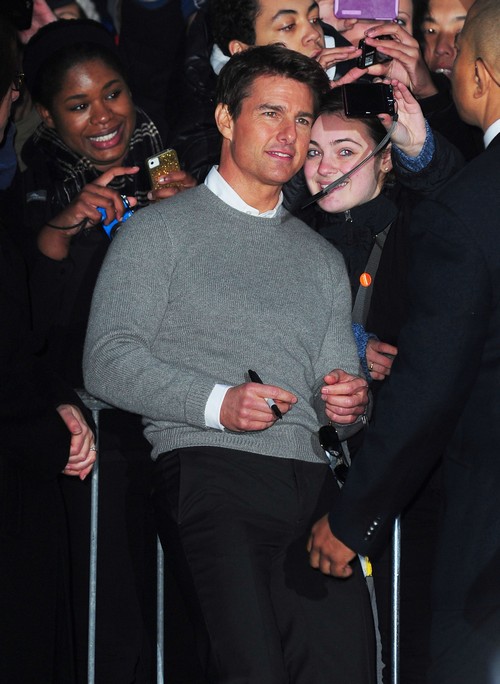 Tom Cruise has always been youth obsessed—the actor has made an empire out of his action movies, which require a tone body and agility. But the actor is facing the reality that, like his father, he may die young from a genetic predisposition for colorectal cancer. Tom’s dad Thomas Mapother III, died at age 49 of metastatic rectal carcinoma, a stage four cancer that is, almost 20-years after his death, still considered incurable.

A source reported to National Enquirer, print edition December 31, 2012, “Tom turned 50 in July, and that’s a year older than the age his dad died. With a young daughter to worry about, he has to be thinking about his mortality.” But does he worry about Suri? He’s barely seen her since his split from Katie Holmes this summer. But the mega star is taking no chance and insists on being one step ahead of any cancer that may form. “Tom’s concern with his health made him sensitive to the smallest ailment. He has a medical checkup at least twice every month of the year. He won’t touch fatty foods. And he began drinking large amounts of water with every meal after one doctor told him ‘flushing out’ his body after eating would prevent cancer.”

Dr. Joel Feinstein, a gastroenterologist, explains the severity of having cancer in his family history. “If a person has a father who was diagnosed with colorectal cancer, he has two to three times the risk of getting the disease as the general population.”  But a source claims that Tom’s fear over his cancer risk has lead to a more pressing health issue—drastic weight loss. “His clothes just hang off him. I don’t think he’s looking after himself.” The source claims he lost about 15 pounds after his divorce last summer, and his water diet may be doing more harm than good. Of course, this could all be fluff by the National Enquirer during a slow news week—does Tom look thinner to you? Do you think his cautious diet is necessary?