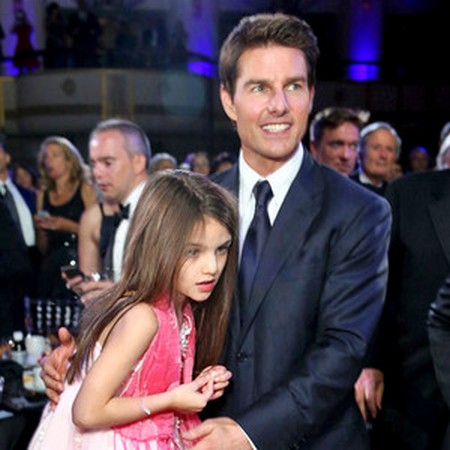 Tom Cruise has been video chatting with Suri Cruise and he allegedly smiled like a serial killer who had too many tequila’s at the “Serial Killer: How Do We Do It?” convention.

According to an exclusive RadarOnline article, “Bert Fields [famous attorney] told Radar that the actor will be seeing Suri soon.”

Fields said last week, “Tom will be seeing Suri very soon. I don’t know exactly when that will be, and I couldn’t tell you, but I do know it will be very soon. Tom loves his Suri very, very much, as he does his other two children. Tom is a family man and dedicated to his children. They are the center of his world.”

Tom has been video chatting to Suri in the meantime. We’re not sure whether he is using Skype or some other instant messaging application (Scientologists use Xenu’s buttocks to dial home).

It is all part of the divorce settlement. Tom is allowed to chat to Suri via video. We imagine it would read something like this, “Katie Holmes placed Tom’s ‘World’s Greatest Husband’ cup on the desk and moved Suri in front of the screen. Tom placed his fingertips against his Macbook camera and cracked a smile. Tom smelled like lavender and depression that day.”

Bert Fields also spoke about the divorce and how the video chatting method could be used to assist in adjusting Suri to the new environment, “Tom and Katie were advised that this could be a very useful tool to help Suri with the adjustment of her parents getting divorced. Tom and Suri have been video chatting and Tom just lights up when her face appears on the computer screen. Tom and Suri also communicate on the telephone and there is no limit on the contact for either parent. If Suri wants to talk to Tom she will call him, with help of course.”

“There are provisions and clauses about which parent Suri will spend Thanksgiving, Christmas and her birthdays with. One of the most important clauses of the settlement is that neither parent can talk negatively about the other in front of Suri and this includes anything about each parent’s respective religion.”

We are truly thankful that Suri is adjusted accordingly and that her parents aren’t trying to destroy one another. We doubt Suri knows about her dad’s insatiable desires to destroy the planet and she only sees him as her normal daddy.

Tom Cruise could see Suri as early as next week.

Let us know in the comments below your thoughts on this situation. Is this a suitable method to assist Suri in getting over the divorce?