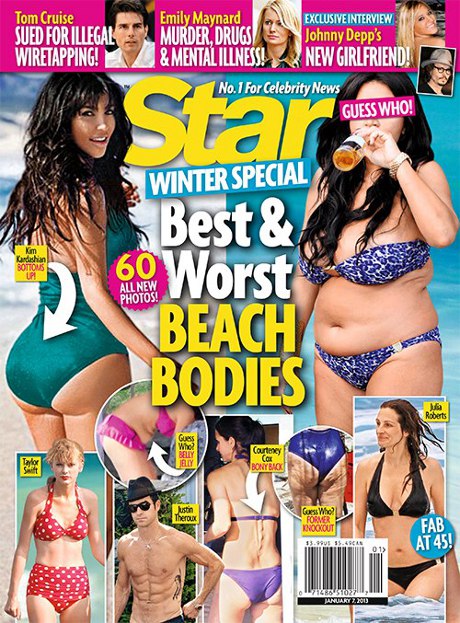 Apparently, our dear friend Tom Cruise is being sued for illegal wiretapping. The little Scientology man graces the cover of the newest Best and Worst Beach Body edition of Star Magazine, but he’s not being called out for his action star body. He’s being called out for his less-than-savory extracurricular activities, which might be getting the Jack Reacher star into some trouble in the not-so-distance future. After all, people don’t appreciate wiretappers. Neither do cops.

Also featured in the Star Magazine‘s Winter Special is a in-depth, salacious interview with Johnny Depp‘s new girlfriend, as well as Emily Maynard’s secret family history, which involves moments of hardcore drugs, murder, and mental illness. Emily maynard has been getting a lot of publicity as of late, including her latest textual fling with Katy Perry’s boyfriend John Mayer!

The moneymaker in this issue definitely is Star’s compilation of Best and Worst Celebrity Beach Bodies of the year. With little remorse for ripping apart celebs, they brutally capture what they think is the best and the worst. I really don’t find it enjoyable to examine people’s bodies in this manner, but the Celeb World mandates this practice, and the tabloids definitely don’t hold back, especially in this issue of the magazine. With beach season winding down during the winter months, many celebs find themselves venturing to more exotic, spicy locales where they can strip it all off and flaunt what their outrageously expensive gym membership gave them. Or didn’t give them.

The magazine gives readers 60 all new photos, some of which feature the Best/Worst bodies of Kim Kardashian, Taylor Swift, Justin Theroux (who has like a fourty-two pack), Julia Roberts (who’s looking smokin’ at 45), and Courtney Cox (who is pictured with an extremely bony back).

Also on the cover are a few mystery bodies, labeled with unfortunate titles. Take a look at the cover up above and see if you have enough Celeb World experience to identify these mysteries.