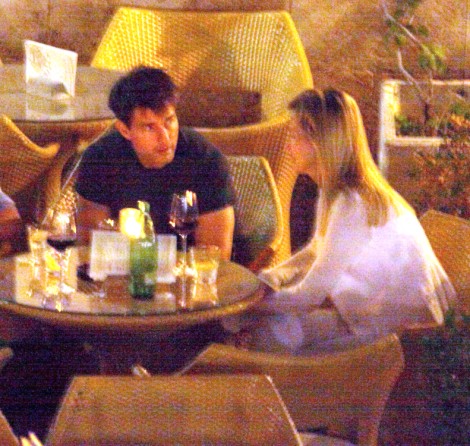 Every Maverick needs a Goose and Tom Cruise is looking to his 17-year-old son Connor Cruise to be his new wingman as he prowls the clubs like a dirty old man searching for some tail. Are they still calling it tail these days son? No, dad they call it ass! Apparently, Tom has given his son instructions (should he choose to accept them) to find the next Katie Holmes. She must be a beautiful brunette between the ages of 23 and 30. Poor Nicole Kidman. Should she be offended she’s not being used as the prototype?

Star magazine writes that Tom’s down on his pick up skills because he’s a “little rusty after five years of marriage.” But Connor is nothing but amenable to the task. “Instead of being worried about his dad horning in on his territory, Connor is actually Tom’s biggest supporter.”

Well duh. It’s in his best interest to have a hot stepmom.

“Connor feels likes he knows Tom best and would be the perfect guy to find him a new woman,” a source told the mag.

So this is what Tom does when he’s not visiting Suri? Will this help his $50 million case against Life & Style?  I have no doubt Tom and Connor are close and are probably morphing into better friends now that Connor’s getting older. But he’s still only 17. That’s pretty young to go clubbing with your dad although, in Tom’s defense, we’ve never seen Connor do anything like that. Connor’s spinning at swanky parties now so I’m sure he meets women who are more than willing to introduce themselves to Tom Cruise’s son.

So is this cute or gross? We can assume it’s probably not 100% true since it’s Star but it could have a true message. Tom is ready to move on. He’s had his little blue period and he’s so very ready to show the world what kind of ass he can bring home. He likes them young, no? More moldable that way I guess. Still… we all thought Katie was pliant too but look what happened there. If I was Connor, I’d look a little outside the box this time around.

Do you believe Tom Cruise uses Connor for date potentials? Is that an odd father/son relationship?