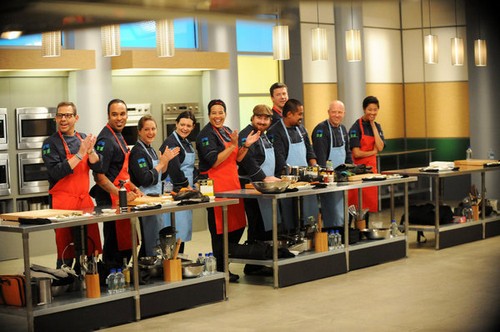 Tonight is an all new episode of TOP CHEF SEATTLE called “Jalapeno Business.”   On last week’s show in the Quickfire, the chef’testants struggled with an entire pantry wrapped in aluminum foil. Tempers flared and competitive juices boiled in the Elimination Challenge when the chef’testants fought it out in head-to-head battles that ended in one chef going home. Season 4 winner and Food & Wine Magazine’s Best New Chef, Stephanie Izard appeared as guest judge, alongside Gail Simmons, head judge Tom Colicchio and host Padma Lakshmi.  If you missed the episode you can read our full and detailed recap here!

On tonight’s eight episode we start with a morning wake up and Kristen saying she’s feeling good about her odds. The invitation came for the Quickfire and they’re told they have to pick their key ingredient. The chefs head to Bow, Washington to a shellfish farm. Micah reveals he grew up kosher and was never allowed shellfish as a child.

The chefs pull up and pile out. They gather up bags of oysters, wading in the mud and having a great time. Josie, as usual, is goofing around too much. John pops open an oyster and gulps it down. Bart says he grew up eating oysters because his family owned a restaurant. Sheldon says he’s never had fresh oysters because they don’t grow in Hawaii.

Quickfire Challenge: Emeril says the Seattle location makes it natural for an oyster-based Quickfire. They’ll be doing oysters on the half shell – half will do a hot prep and half a cold prep. Emeril cautions them that cooking even a minute too long will ruin the dish. There’s a $5,000 prize and they’ve got just 25 minutes.

Sheldon got a cold apron when he wanted hot. Brooke’s fussing that the oyster shells are brittle. Micah’s making a crispy fried oyster. Bart’s using champagne on his oysters – interesting and sounds yum. John’s using garlic butter sauce with a Parmesan foam.

Bart’s smoking his in a Ziploc bag – it’s interesting looking – more like a science project than a dish. Josie’s making chorizo for hers. Lizzie’s using currants. Josie’s in a panic because her sauce is broken. The chefs are in a last minute scramble for perfection and Padma comes in and calls time.

Brook’s cold prep with salsa verde left Emeril with shells in his mouth. John’s garlic and cheese foam oysters drew praise. Josie’s cream hot prep also was complimented. Micah’s fried oysters with hot sauce and chili got a compliment from Emeril on the seasoning. Bart’s champagne oysters didn’t get a compliment. Sheldon’s cold prep with ginger was liked by Emeril.

Emeril said they did a fantastic job, but said Bart’s champagne was masked by the heavy creams. Josie’s sauce was broken – Emeril didn’t miss that. He said John’s prep had no pop.

The winner is… Micah! Pretty good for a guy who grew up not eating this food. He said he was excited to cook for Emeril and as a single Dad can use the $5,000.

Elimination Challenge will be cooking for roller derby girls! Josie’s excited to see the girls. The chefs will be cooking in teams of two for the Rat City team’s final event of the season.

John and Brooke pair up, but she’s not sure. Bart’s stuck with Josie. Micah’s with Lizzie. Sheldon’s with Josh. Stefan gets Kristen.

They have to cook dishes inspired by the girl’s names: Teriyaki Terror; Jalapeno Business; Eddie Shredder; Kutta Rump; Tempura Tantrum.  Emeril said the dishes should be bold and brash like the girls.

Micah picks Jalapeno Business, Sheldon picks Tempura Tantrum, Stefan picks Eddie Shredder, Lizzie chooses Kutta Rump and Josie gets Teriyaki Terror. They will be cooking for 100 people and get two and a half hours. Tonight they get to go see the Rat City girls in action on the rink.

At the match, Josie’s loud and obnoxious as usual. Brooke says it’s like violent ice capades. Josh says Josie’s being worse than usual. Josie says she feels like she’s there with her parents because the rest of the chefs are being low key.

Back at the apartment, Josh and the guys are talking about Josie on the balcony and she comes out to confront them. She starts calling them names and says Micah’s in a closet and to f-u. The guys tell him not to worry about. Bart tries to get Josie calmed down and focused on tomorrow’s challenge.

The chefs get to the rink. Lizzie and Micah haven’t worked together before. They’re making a crabbed stuff jalapeno. Bart says he’s civilized enough to deal with Josie. Micah’s still aggravated about Josie’s behavior the previous night.

Josie wants to get aggressive with the spices. Bart says his ideas of bold are different. Stefan and John start trash talking across the kitchen. Brooke and John are making a rump like the name. John says Brooke reminds him of his daughter. He reveals that his wife took his daughter in the divorce and has kept them apart.

Sheldon is making a tempura dessert with dipping sauces. He shows Josh how to mix it up. Stefan mocks the stuffed jalapeno and thinks it’s pedestrian. Stefan is doing corn puree with eggs and liver. Josie doesn’t like the seasoning or texture on the rice.

The girls roll in and Josie starts her big mouth routine. They begin serving the girls. Padma and Emeril show up with the other judges. Emeril says he grew up going to roller derby. Hugh Acheson, Emeril, Tom and each roller girl are the judges for the event.

The judges start with Brooke and John’s rump and slaw. Hugh likes the flavor on the slaw. Next, it’s Josie and Bart’s teriyaki dish. Kutta says the dish is too earthy. Emeril doesn’t like the seasoning or texture.

Josh and Sheldon’s dessert is next. It’s a tempura treat that you drag through sauces. They like the sauces, but the tempura itself wasn’t cooked properly. Emeril says the fryer was too small. The skater loved it and said they pulled it off.  Emeril said the chefs could have been bolder.

Padma comes to call John, Brooke, Micah and Lizzie in to see the judges. Padma tells them they had the best two dishes at the party. Tom said they did a great job with bold flavors. Emeril said the lobster was a perfect cook and the sauce was delish. He tells Lizzie and Micah the jalapeno was a hit. Hugh announces the winners as Brooke and John.

Brooke says – winning doesn’t suck. She says she and John mesh really well. John said it would have been better if he had gotten a solo win. The left behind chefs mock the jalapeno popper concept. John tells them they won so the other chefs know they were in the bottom. Josie, Bart, Sheldon and Josh are called in to see the judges.

Padma tells them their dishes were the worst and one will be eliminated. Tom says Sheldon and Josh had a good concept. Bart says he cooked the rice and beef. Josie said she cooked the marinade for the rice. Tom asked if she didn’t think the seasoning was bland on the rice. Tom said adding properly seasoned to bland doesn’t bleed over. He chastises Bart for being a chronic under-seasoner. Josie admits she didn’t taste it after Bart added more seasoning. Bart said he thought it was nice and spicy. Art said they agreed on the dish. Emeril said it was a mish-mosh. Hugh said it was like boring porridge.

Josie says she shouldn’t go home when it’s Bart’s fault that the seasoning was off.

Tom tells the guys their tempura failed and again critiques Bart’s seasoning issues. Padma sends Bart packing. Bart shakes hands with them all. Bart says he’s owned a restaurant for seven years and no one sends his food back for under seasoning. He says he didn’t push it enough and step out of his comfort zone. He’s glad to be free of Josie’s verbal diarrhea though…

Don’t forget to join us next week for another episode of Top Chef!

Disclosure:  I’m required to disclose a relationship between our site and Bravo. This could include the Bravo providing us w/content, product, access or other forms of payment.