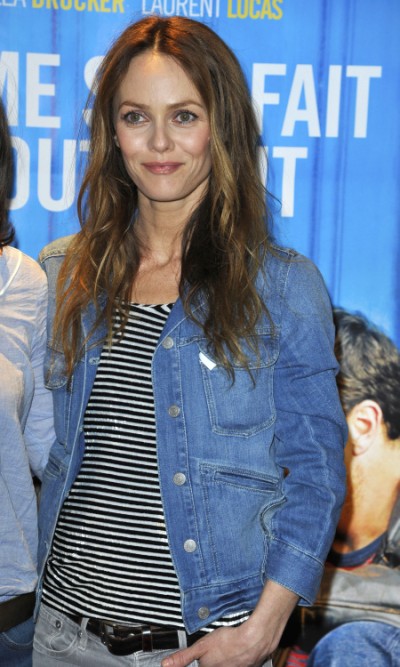 Vanessa Paradis has made the decision to move on from baby daddy Johnny Depp and make sweet music with French singer, Benjamin Biolay – literally. Oh ya, they might be hooking up on the side too.

Karl Lagerfeld played cupid for the couple and introduced them earlier this year. Biolay is former French First Lady, Carla Bruni’s, ex lover and Karl thought it would be a great idea for Vanessa and Biolay to record a duet together. See? When he’s not calling Pippa Middleton ugly or Heidi Klum fat, he’s actually a nice guy!

“They’re the same age and have similar backgrounds in music,” a source told Metro (via Now magazine). “So Karl was keen for them to meet.”

Why not? Vanessa needs to get back on the horse and start dating. Johnny’s not coming back (nor should she want him too). Have you seen pics of Johnny lately? Homeboy is doing something to his face and the ten scarves he’s sporting to hide it aren’t fooling anyone!

So good for Vanessa. But is she having too much fun playing the field? I keep hearing rumors Johnny and Vanessa’s daughter Lily-Rose Depp is having a tough time with the separation and acting out. Is it too early for Vanessa to be getting into another serious relationship? I’m not playing double standards. I know Johnny’s whoring it around town. But Vanessa’s the mom and unfortunately held to different standards. Should Vanessa chill out and stay single for the sake of her kids? I know she’s probably lonely and needing affection but that’s what f-ck buddies are for. That’s why it sucks to be a mom! You have to put your kids before you! I’m not looking forward to that AT ALL!

However, it’s not like she’s walking down the aisle anytime soon. Perhaps Biolay is just Vanessa’s weekend friend. Any moms out there feeling judgey against her? What about Johnny Depp? Vanessa Paradis lives full-time with the children so is it worse for her to have a new dude around the house?