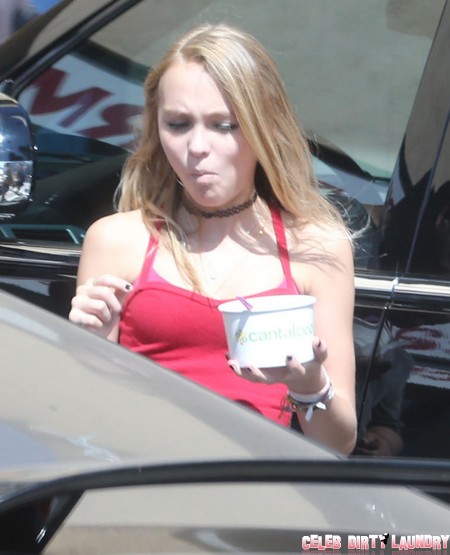 Have you taken a really good look at Lily-Rose Depp lately? No, okay then take a look at the photos of her here. Do you see anything wrong with a 13 year old child looking like this?  The media spent a few months fixated on Lily-Rose’s parents’ split- that’s Johnny Depp and Vanessa Paradis, just in case you were sleeping beneath a rock, and the fallout included a detailed look at who Johnny was bedding and partying with. It seemed that Vanessa was off in a corner heartbroken, cuddling her two babies and licking her wounds- or was she?

Usually tough times cause a mama bear to pull her kids closer and to really keep a good eye on them. After all we’re to believe Lily-Rose and her brother Jack are the most important thing, right? But if that’s the case why does Lily-Rose look like a runaway on sunset strip?  And before you start in with the argument that she looks like all 13 year old girls nowadays I can assure you it’s not true. I have a daughter that age and neither she nor her posse of friends looks like this.

Who is keeping an eye on Lily-Rose? Where does the blame actually lie? Johnny has said that he wants both of his children to focus only on school until they are 18 and he wants them to have fairly normal childhoods. I think the problem is that he himself battles his own addiction demons and in the past has admitted that when he isn’t stable he kind of goes away and keeps himself from the kids. He knows those dark periods can be really scary and wants to spare them.

At the same time, Vanessa has long been a party girl. She thinks it’s great if Lily-Rose wants to act now and encourages her to pursue a Hollywood career as a minor. Hell, Vanessa was naked on screen as a teen! She hasn’t changed her thinking or ways much and so she would see nothing wrong with her daughter looking like this or getting dirty on screen in a few years, just as she did! Unfortunately, while Johnny has the morals he is simply too screwed up to enforce them in Lily-Rose’s life.

Lily-Rose has already been likened to a young Lindsay Lohan, do you see the similarities starting to appear already?  Will her parents step in before it’s too late? Tell us your thoughts in the comments below!

Johnny Depp’s daughter Lily-Rose Depp, her bodyguard and a friend stopping at Cantaloop for some frozen yogurt in Los Angeles, California on September 23, 2012.