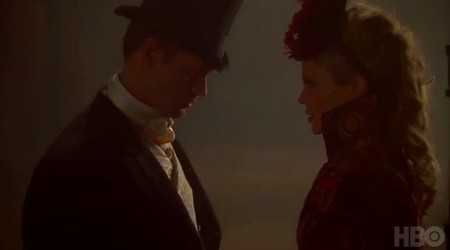 Tonight was the season premiere of season 5 of True Blood and it was all and more than I hoped for!  We have a sneak peek video and some spoilers to wet you appetite for next week’s episode 2 ‘Authority Always Wins.’

On tonight’s season premiere so much happened.  Lafayette asked Pam to make Tara a vampire since she was killed by Debbie.  Pam does not know if it is possible, but agrees to try if Sookie will help he repair her relationship with Eric.  Meanwhile Eric and Bill are on the run from the Vampire Authority.  We met a new character Nora, Eric’s sister.  The wolf pack took Sam prisoner and after he led them to their pack master Marcus’ body they wanted to kill him.  Jesus body has disappeared.   There was so much more and if you missed the episode you can read our full and detailed recap here.

On next week’s 2nd, episode at the Vampire Authority headquarters in New Orleans, Bill and Eric meet Salome and become acquainted with the Authority’s interrogation techniques. Pam recalls her human life as the madam of the Comstock Brothel in San Francisco, and her first encounter with Eric. Werewolves J.D. and Rikki pay tribute to Marcus, but Alcide refuses to participate or take his rightful place as the new packmaster.

Martha Bozeman shows up wanting to see her granddaughter, causing conflict for Sam and Luna. Fearing Russell’s return, Sookie procures a home-protection system; Arlene tries to get to the bottom of Terry’s erratic behavior; Steve Newlin stops by with an offer for Jessica; and Jason feels the brunt of his womanizing ways.

‘Authority Always Wins’ airs on HBO on June 17th, 2012.   Check out the preview video below and let us know in the comments below what you think!