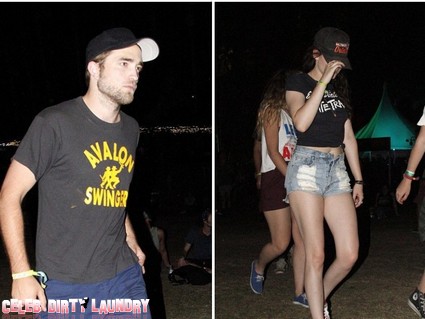 Coachella was bursting at the seams with stars. But the  famous faces that copped the most attention were Twilight stars Kristen Stewart and Robert Pattinson. The pair spent Saturday and Sunday at the music festival  – but even under the cover of darkness they couldn’t hide from the Twihards.

K-Stew and R-Patz took in some of the biggest names on the charts including Radiohead, Florence + the Machine, The Hives and Dr. Dre & Snoop Dogg. But onlookers say they more into each other than who was on stage at times. A source telling Celebuzz ‘they were kissing and holding hands during Radiohead, swaying and singing along to parts of the songs.‘  But don’t expect any lovey dovey pictures – the twosome split up as soon as they spotted a photographer. Message to Rob and Kristen – the whole world knows you’re boyfriend and girlfriend. No need to hide anymore!

Bella and Edward blended into the crowd despite their superstar status. K-Stew was rocking cut off denim shorts and a tee shirt with ‘White Trash’ emblazoned across the front. R-Patz looked like any other 25 year old watching the bands, drinking and having a good time with his GF.