Vanessa Minnillo and Nick Lachey are Having a Baby! 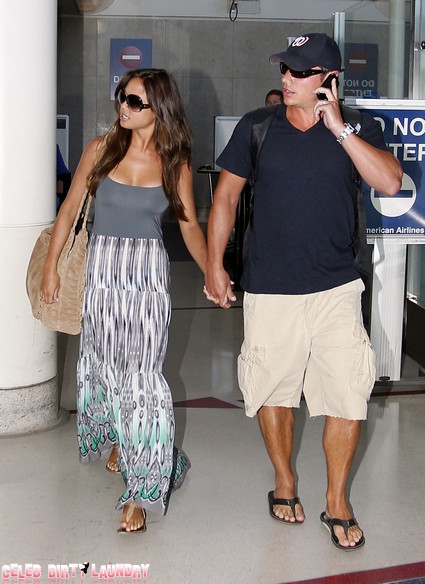 Were they inspired after seeing Jessica Simpson’s very pregnant belly? Simpson’s Ex-husband Nick Lachey has finally revealed that he and current wife Vanessa Minnillo are pregnant. Lachey broke the happy news this morning while co-hosting “Live! With Kelly.”

After much speculation and baby bump spotting, especially during a trip to Mexico in February, Lachey admitted that Minnillo was indeed pregnant and actually found out while she was in New York for an appearance on “Live!” in January. “She was in New York and I was in the Bahamas. She went to the store and got a pregnancy test and it came back positive. We’re having a baby!,” the former 98 degrees singer told Kelly. “This is the one thing that more than any other I’ve looked forward to, and it’s overwhelming.”

The couple, who married last July on Richard Branson’s Necker Island—the wedding was filmed for a TLC special—have been together for nearly 7 years. They met in 2006 while on the set of Lachey’s “What’s Left of Me” video following his very public relationship and divorce from Jessica Simpson.

Following Lachey’s announcement, 31-year-old Minnillo posted the following statement on Twitter: “Finally, Nick and I are ready to share our news…We have been blessed with a little Angel! We can’t wait to meet Baby Lachey!!!”

Lachey’s also took to the social media website saying, “Thanks to everyone for all the well wishes! It means a lot to Vanessa Lachey and I…who’s guessing? Boy or girl?”

It seems, regardless of not knowing the baby’s sex, the couple has already been discussing potential names. “If it’s a girl, I think it might be Sophia. If it’s a boy, I’m not sure,” Lachey divulged on the talk show.

According to Lachey, his wife is due “in late summer, early fall” and while her bump is beginning to show, one source told Us Weekly “She’s just 12 weeks.”