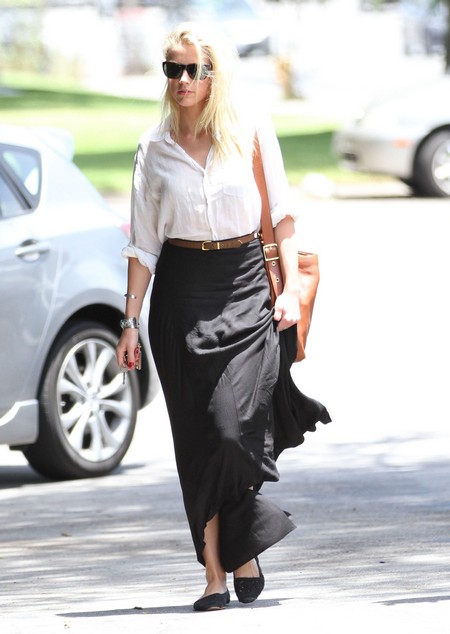 Amber Heard has stepped out recently, amid the drama that she was the main catalyst for Johnny Depp and Vanessa Paradis’ split.

Vanessa Paradis has called Amber Heard a “man stealing whore” and watched a Tim Burton movie while weeping in popcorn. A source told NOW magazine, “Vanessa’s devastated that Johnny’s dumped her. She blames Amber and calls her a man-stealing, two-bit nobody and has vowed to not let her anywhere near their children.”

Yes, Vanessa, Amber is like that lady at the supermarket who always pushes into the line before you and says, “They just waited for my pickles.” Then, when you look away, she steals the last copy of 50 Shades of Grey out of your trolley and fingers the pages like a serial killer.

Johnny Depp and Amber Heard were co-stars in The Rum Diary, she was the hot girl with too little clothes and he was the typecast neurotic writer. Nothing to see here people, move along! Many have pointed the finger at Amber saying she is the cause of the split between Depp and Paradis. A source close to Depp explained how much Depp appreciates Heard’s “Hitchcockian” beauty, “When I first saw Amber, it was like seeing an old-time movie star like Lauren Bacall.”

Amber eloquently explained to Dazed magazine, “He’s such a wonderful presence; he is enigmatic and compelling and a true artist, seriously intelligent and incredibly sensitive. Everybody on set respects and likes him, which says a lot about an actor. It’s a grueling job at times and the stress level that everybody feels in the industry is intense – but it doesn’t affect Johnny. It seems like he has time to look everybody in the eye and I like that, it was wonderful to see”

Okay then Amber. Whatever floats your naked boat? The two are also allegedly dating, according to Us Weekly. Are we surprised?

Meanwhile, Vanessa was at the premier of a French film (we’re not going to put the name here because then you’ll try to read it out loud, miserably fail, try again and eventually you’ll click your tongue and berate yourself for not paying attention in French class at school). She had sad eyes, but at least cracked a smile like a dead person who was injected with a bit of Voodoo, so our hopes are up for poor Vanessa.

Do you blame Amber Heard for the split? Are you pro-Vanessa Paradis?

Let us know in the comments below your thoughts.

Click on the thumbnails below to enlarge more pics of ‘Machete Kills’ actress Amber Heard and a friend leaving the Western Costume Co. in Burbank, California on July 10, 2012