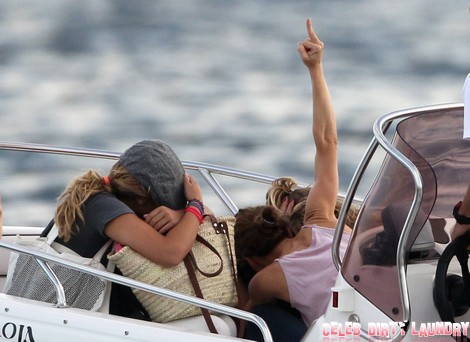 Vanessa Paradis, the now ex-girlfriend of Johnny Depp, took their two children, Lily-Rose Depp and Jack Depp on vacation in Saint Tropez this week. The family of three and some friends were seen on a small boat before making their way onto Johnny Depp’s yacht that was anchored of the coast, the Vajoliroja (Named for the first letters of the names of his family). Let’s not forget that this time last year the former couple were spotted on the same

However, times have changed for the family. The couple announced their split earlier this year after 14 years together.  During a recent chat with Harper’s Bazaar via Popsugar, Vanessa explained what she looks for in a man, saying: “Well, my type is obviously creative …creative, with burning eyes and a pretty.”  She neglected to mention that her type is also a self-indulgent flake indulging in an extended mid-life crisis.

This is probably a good time to take a family vacation. There were reports recently that Lily-Rose is turning into a real wild child teenager! With Lily-Rose’s parent splitting it’s been getting to her and now her parents are fearing that she is going to turn into the next Lindsay Lohan. That could quite possibly be a parent’s worst nightmare.

Maybe Lily-Rose saw her father’s erratic behavior – such as sleeping around, boozing it up, clinging on to his youth, etc, and now thinks it’s fine to do the same. Despite reportedly being concerned for his own daughter, Depp was nowhere to be seen on this vacation. Yes, I understand they aren’t a family anymore but Depp should make time for his daughter. Depp already has more money than he probably knows what to do with at this point so it wouldn’t hurt to relax for a little while, maybe take a vacation and spend time with his children. Regardless of whether or not your 13-year-old daughter wants to spend time with you.

Vanessa probably wasn’t using the Vajoliroja for a disciplinary voyage for Lily-Rose.  Have a look at the Paradis-Depp family and their bare-bones accommodations – see how they struggle